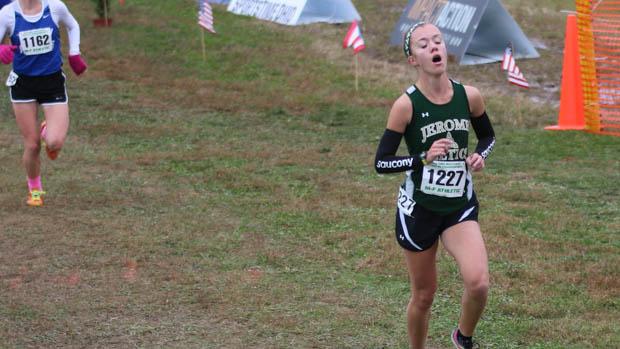 Best time in a 5K race and in which meet?

Tell us how your summer training is going?

Summer training is going very well, as a senior and one of the top returners in the state I've really stepped up my summer training, adding more miles, more intense workouts and overall working harder.

What are your goals for the upcoming season?

My personal goals for the upcoming season are first, break 18 min and hopefully by the end of season continuing to run under 18. Additionally I would like to place in the top 5 at the state meet and to have my team join me in racing there. That is a very big goal for all of us as we have never had a girls team race at the state level.

How long have you been running and how did you get started?

I began running my 8th grade year, not with the goal of running in high school but instead playing soccer. I attended a cross country practice the first day of summer before my freshman year and never touched a soccer ball again! My coach, Kenny Schuster really helped and inspired me to choose to run.

Will you be competing anywhere out of state this season?

I will be competing out of state, we will run at the Trinity-Valkyrie Invite in Kentucky, as well as the Nike Regionals meet in Indiana.

What is your favorite course to run in Ohio?

My favorite course in Ohio is the District Course at Watkins because of how fast the race is, and also because it is a very fun course to run at!

What meet during the regular season do you put extra emphasize on to compete well at?

I always put extra emphasis on the Tiffin Cross Country Carnival, it's a very large race and also a hard one. The course is tough and so is the competition and it's nice to race that way a little earlier in the season to prepare for later on at the tournament level.

What is your favorite cross country race so far in your high school career?

My favorite race has been the state meet last year. It was one of the very first races I felt like I was in complete control of the race. That I knew exactly what I needed to do and I was going to do it. I felt strong and confident and it will forever be one of my best and favorite races, because I also got to race with the best runners in the state, a lot of whom happen to be very good friends of mine.

My favorite cross country memory was after the State Meet last year, when I crossed the line and realized I had finished 8th, my teammates were the first people I saw. The entire team, my friends, and family including my best friend who had graduated the year before, were all standing at the finish and I went over to them and cried of happiness and exhaustion and kept saying "we did it, we did it" Being 8th in the state was a huge step forward for me. I had realized my potential as a runner and knew what I needed to do to achieve my goals and having them there made the dream come true. I don't know if any of them know just how much that meant to me.

When you are not running what is your favorite thing to do?

If I'm not running, I'm usually hanging out with my friends or family, working as a lifeguard for the city of Dublin(I love my job!) or with my teammates.

My favorite quote is actually something my mom says to me before every race, "run fast, don't fall down, and fierce Carly" it gets me out of my head and focused on the race.

What shoes do you train in?

I currently train in the Brooks Glycerin.

What shoes do you race in?

What's on your Ipod when you go out for runs?

What professional athlete would you most like to meet?

I'd really like to meet Alexi Pappas, she's currently an Oregon project runner.

What is something that most people don't know about you?

Most people don't know that I have a twin brother that runs just as well as I do, sometimes at meets I'll have people ask me about him not even realizing we are twins! It can be comical at times.