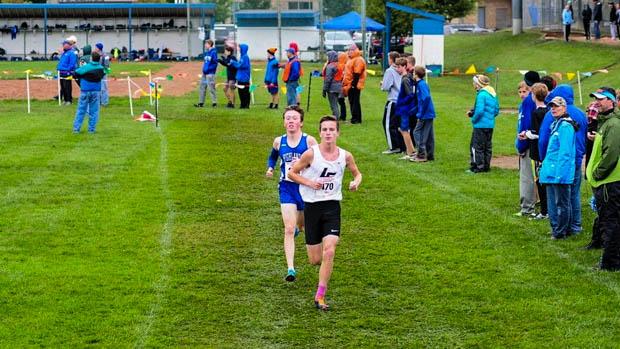 Dustin Horter leads Ethan Shuley in the Boys D1 Varisty race at the St. Xavier Invitational Presented by Saucony and Fleet Feet Sports. Shuley is a Sr. from Highland, Ky and has a #1 KY ranking and is the defending AA State XC Champion. (Photo Chris Greene)

Lakota East sophomore, Dustin Horter, participated in and was highlighted in our Saucony Flo Summer Training Blog. Saucony Flo Summer Training Blog. We do not often have the opportunity to blog during the XC and track seasons, but Dustin has agreed to provide us with his thoughts on his races on a weekly basis throughout this season. In this, the fifth of the series, Dustin comments on his race in the St. Xavier Invitational - 10/3/15. Horter won the D1 Voy Varsity race in a time of 15:53.20. (We are a week behind on this segment as grades are a precedent)

The day was very rainy. The team loaded the bus at 6:45 in the morning to get to the meet and tour the course. When we got to the meet, we realized the course was extremely muddy and messy from the rainfall the night before and that day. I soon realized that a PR wasn't out of the realm of thought yet, but it wasn't very likely. Going in, I knew I would have some competition from Ethan Shuley, a high profile runner from Kentucky (Shuley is a Sr. from Highland, Ky and has a #1 KY ranking and is the defending AA State XC Champion). So when the gun went off and he was right on my hip, I knew how to handle it. For the first time in my running career, I would categorize this race as more of a strategy race than an all-out, PR bound race. I was not very stunned that Shuley was on me from the get go, but this had happened to me before and I gotten out kicked and I didn't want that to happen again! Shuley ran a great race but I knew how to counter his strategy. Mile one I stayed at a very relaxed 5:02 pace and rolled up the hill at X. Mile two was about 10:12 coming through and I was sort of shocked to see that time having run 9:50's for the past two weeks in a row at the two mile. From mile 2-3 was when God really gave me the strength I needed. Shuley was still with me at about two and a quarter miles, so I decided that if I was going to take the race, there would be no better time than in that very moment to start to kick it in. From that point forward, I picked up the pace a lot and started pulling away from Shuley, never looking back. When I crossed the line, it was in a 15:53, which wasn't outstanding, but on a day like that, I was just proud I survived without injuring myself.

Special Moment of the Week- After the race, I was walking around shaking hands and congratulating people on a job well done in the event. One runner, I didn't get his name or where he went to school, came up to me and shook my hand, saying that he reads my blog, and he really appreciates how I "run for God". That was really special to me because no one has ever said something like that to me and it was dead on what I run for and stand for. I run to give God the glory, no doubt, one hundred percent and I was so glad another fellow follower took notice of that and appreciated me not just as a runner, but a brother and Christ follower. That was an awesome moment!