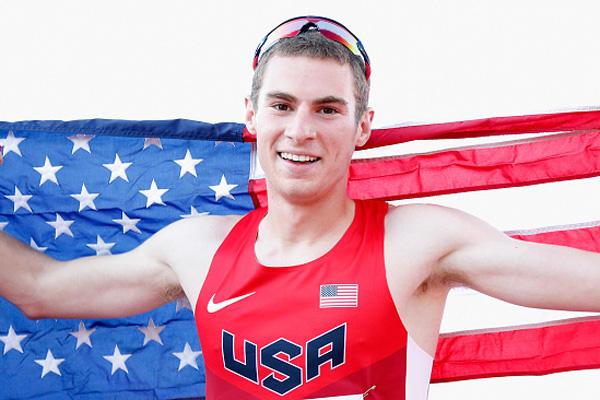 Just over three year's ago a young man from Tri-Village high school in New Madison, Ohio toed the line in the 2013 Division 3 1,600m at the Ohio State Track & Field Championships.  With the statue of Jesse Owens, perhaps Ohio's greatest track & field athlete, ever present outside the stadium, a dream and goal of Clayton Murphy's was about to unfold.  Dreams are what fuel goals and goals, motivation and motivation, hard work and hard work can result in a dream becoming a reality.  It all paid off as Murphy won the 1,600 in one of the most exciting races of the D3 and all of the State competitions, outlasting Cory Glines from St. Thomas Aquinas, in a new State meet record time of 4:11.72. 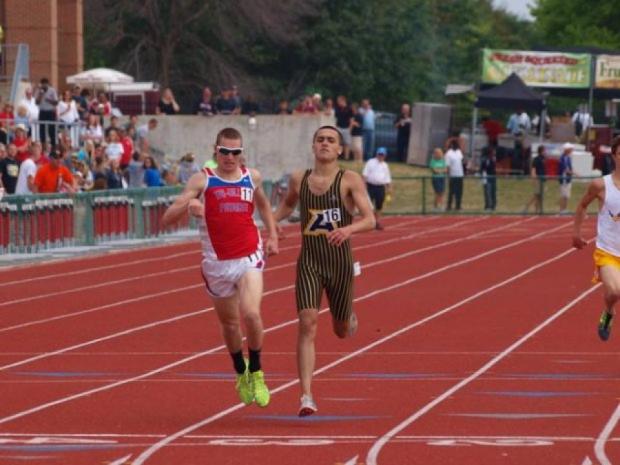 That dream however, was just one of several for Murphy.  The next would be running at the next level and getting an NCAA title.  The next, was of going to the Olympics.  The next, and biggest, to win an Olympic Gold medal.

Murphy ran at the next level for the University of Akron.  In March, he got his 1st NCAA title, winning the D1 Indoor 800m championship in a time of 1:46.68.  One month ago, he captured his 2nd NCAA title, outdoors in the 1,500, winning in 3:36.38.  Now, all of his hard work has come to fruition, and another of his dreams has become a reality, as he has become an Olympian, winning the US Olympic Trials in the 800m in 1:44.76 and earning his opportunity to run for the US in the 2016 Rio Olympic Games.

Murphy took time, from his now very hectic schedule and the media blitz surrounding the Olympic Trials, to talk with me about the Trial's race, his training and the upcoming Olympic 800m. 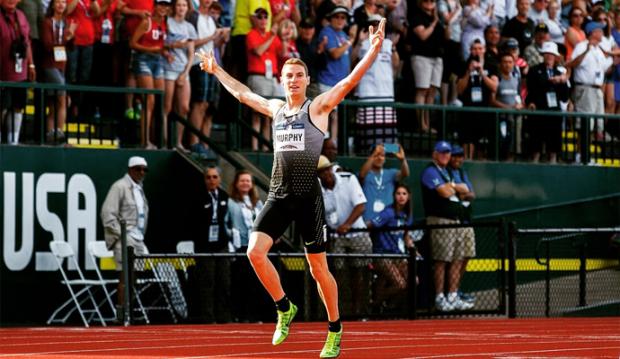 OH Milesplit:  Clayton, congratulations and thank you for the opportunity to talk with you.  You have certainly come a long way since HS graduation from a Division 3 high school runner at Tri-Village in Ohio in 2013.  Your senior year of HS you were 4th in the OHSAA D3 State XC Championships in 15:32.45, 2nd indoors in the OATCCC State D2/3 Indoor Championships in the 1,600 with a 4:26.05, 1st in the OHSAA D3 1,600 with a new State Meet Record of 4:11.72 and 7th in the 800 with a 1:56.66.  In 2016, you are the NCAA D1 Indoor champion in the 800 with a 1:46.68, the NCAA D1 Outdoor 1500 champion with a 3:36.38 and now, the US Olympic Trials 800m champion with a time of 1:44.76.  Let's talk first about you're 800 in the Trials, then about you're HS career and finally, about the Olympics.
What were your thoughts going into the race and as you stepped to the line for the start?
Clayton:  My thoughts going into the race were good! I was confident during the day sitting in the hotel. My legs felt great on the shake out and warm up. Pre-race strides seem faster than ever. I was able to have an outside starting position of the waterfall start which allowed me to stay out of trouble for the first 300. I was maybe a little further back than I would have liked at the 400, but I didn't want to panic as my legs were feeling good.
OH Milesplit: In my opinion, the 800 is a race of speed, strength and patience and you ran a very controlled, almost ideal 800.  The first 200 and through the 400 you were on the outside, not boxed in.  Watching to see how the race would develop and staying in contention.  A little mix up around the 300 and you came through the 400, you were in 8th.  Berian led in around 51.  Did you expect that pace and for him to be leading?  What were your thoughts as you went through the 400? 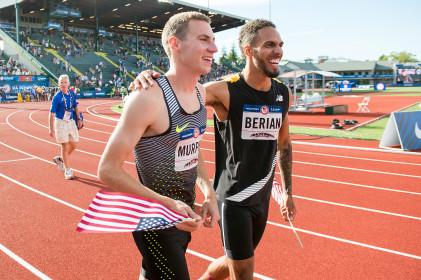 (photo - Denver Post)
Clayton:  Yes, I expected him to be leading. I actually was expecting a somewhat faster pace, but was comfortable at 51.5 and was ready to move as we reached the backstretch.
OH Milesplit:  You started a gradual acceleration into the back straight and as you approached the 200 you began to move towards the leaders, using your 400 speed.  With 200-180 to go you started your kick.  With about 120 to go, Berian was still leading with an approximate 5-6m lead on you but you were catching him and your speed and 1,500 strength were starting to show.  Were your thoughts of catching him and winning or on just continuing to run as fast and controlled as you could at that point?

Clayton:  The goal was to be top 3, so the entire race I was racing the people and not even worried about the clock. I didn't know any splits until in the media tent an hour after the race. I just saw the final time. So, the entire time, even the last 100 was just about racing people. I am very competitive over the last 100 and that's part of the fuel for the final kick.

OH Milesplit:  As you saw that you were catching him, did you start to think "I can win this?"  At the finish, what was your first thought as you crossed the finish line?
Clayton:  I wasn't sure with 100 if I could catch him to win or not. With 30-40 meters to go, is when I realized I was going to catch him.  I was trying to run as hard as I could to catch him and wanted to just compete then. The thoughts after the race were a lot of wow. I had finally achieved the largest goal for me of my career. It all hit about 30 seconds after the finish.   When I sat down on the track it hit me that I was going to be an Olympian.
OH Milesplit:  When did you first start running?
Clayton:  Junior high cross country was the first running experience that I had.  (In 2009, Murphy finished 93rd in the Troy Regional with a time of 18:54.26)
OH Milesplit:  It appears that you were running the 3,200 up until your junior year in HS.  When and why did you make the decision to drop down to the 1,600?
Clayton:  I think I realized I had more speed at that time and wanted to move down to use that and to just see what would happen.
OH Milesplit:  You have always run XC and have always been good at it.  What do you believe you gain from running Cross, even though you are much better in the mid-distance races? 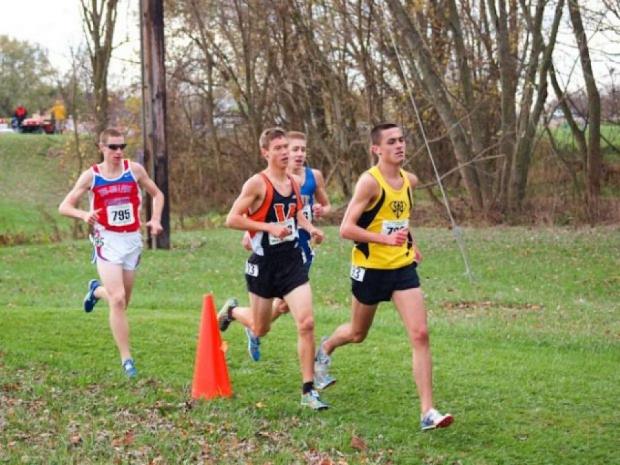 2012 OHSAA D3 State XC Championship.  Cory Glines of St. Thomas Aquinas leading.  Sam Prakel of Versailles in in 2nd and Kyle Polman of Independence 3rd.  Prakel would win in 15:16.62.  Glines was 2nd in 15:20.66.  Polman 3rd in 15:24. 30 and Murphy 4th in 15:32.45.  Note:  Sam Prakel went to Oregon and has qualified for the semis in the 1,500 at the US Olympic trials.(photo M. Stonecipher)
Clayton:  The strength of the sport. Both mentally and physically. You are racing for 20+ minutes and the mental discipline you develop translates great to the track.
OH Milesplit:  After winning the NCAA D1 1,500m when and why was the decision made to drop down to the 800 for the Olympic Trials?
Clayton:  I had the standard in the 800 and I felt it was best for me to run that event with training and, I was motivated to do that!  (2016 USOT Qualifying Standard - 1:46.00)
OH Milesplit:  Do you think there is any advantage in a runner moving up from the 400 to the 800 or in dropping down from the 1,500 to the 800?
Clayton:  I'm not sure.  Every athlete is different.  Like for me, speed is more natural than the strength is, so I like to focus more on strength running and allow or use my natural speed. In terms of speed, my 400s are a lot of times 22-23 splits, closer to even paced than other 400 speed guys.
OH Milesplit:  What is your 400 PR?
Clayton:  My 400 open PR is 49.0 from high school but I have run FAT splits on 4x4 of 45.8
OH Milesplit:  Once the decision to run the 800 was made, did your workouts change much from training for the 1500 to training for an 800?  What was a typical week of training for you leading up to the Trials?  Monday - Sunday.
Clayton:  No my workouts are fairly similar from 800-1500. There are obviously some speed changes, but they are similar.  My typical speed workout is usually 800 meter paced, so between 56-52 and usually some type of 200-300 with longer rest.  A typical week includes a long run and usually two track workouts. One strength based in flats and the other spiked up speed work. I also usually have two morning runs and a tempo run of some type.
OH Milesplit:  The defending London Olympics champion in the 800 is David Rudisha of Kenya who ran an amazingly fast 1:40.91 in London.  He recently ran an altitude 800 of 1:43 and change.  It's early to think about, but if Rudisha is in the 800 finals in Rio, one would expect the race to be fast again.  What would your race strategy be with that kind of speed in the race?  Can you be as patient as in the Trials?
Clayton:  I have to make sure I am probably closer to the front. On the world stage my kick is less potent. So I might have to adjust my plan so I can be in a little better position.
OH Milesplit:  What will be your concentration, work out wise, over the next month to get ready for Rio?  Strength and speed, or more of a concentration on one over the other?  Why?
Clayton:  I'll have to concentrate on both.   With three rounds in Rio, I need to keep my strength up to be able to handle the rounds.

OH Milesplit:  Other than winning an Olympic Gold medal, what is your motivation as a runner?

Clayton:  I enjoy the competition. I think the racing experience keeps me motivated for running.
OH Milesplit:  How would you describe yourself as a runner?
Clayton:  I like to have fun.  I'm always joking during practices and during warm ups.  I don't like to be quiet. And, I love to compete. 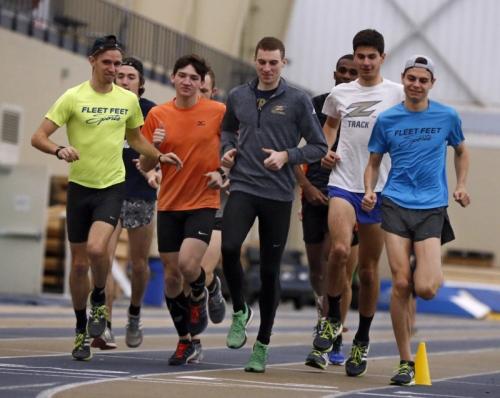 (photo Akron Beacon Journal)
OH Milesplit:  At what point in your running career did you begin to realize that you could run at the next levels from HS, collegiately and now at the Olympic level?
Clayton:  High school to college was both in my Junior years. Last summer in college I gained a lot of international experience and began to realize that I could compete at that level. (Murphy won the Pan American Games 800m in Toronto with a 1:47.19.)

OH Milesplit:  How have you changed from HS and now?

Clayton:  I think I have changed in the confidence in myself. I am much more confident in workouts and races than I ever was in high school.
OH Milesplit:  What would you attribute your success to from your senior year in HS too now?  What advice would you give to a freshman HS middle distance, distance runner about running XC and track? 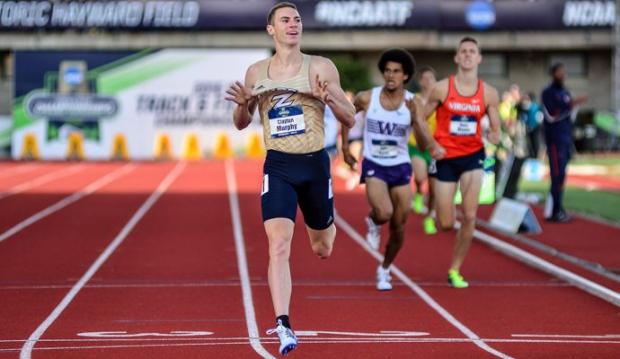 1,500m Win at the D1 NCAA Track & Field Championships - 3:36.38 (BlueBag Sports - Clinton Randall)
Clayton:  My coach has been huge. Coach LaBadie is the reason I am healthy and have confidence in myself.  My advice is simple...stay healthy, have fun, and be a competitor.  (University of Akron Head Coach Lee LaBadie)

OH Milesplit:  Thank you so much for taking the time and giving me the opportunity to talk with you.  All of Ohio wishes you the best in Rio and we will certainly be watching as you go for the Gold in the 800m.