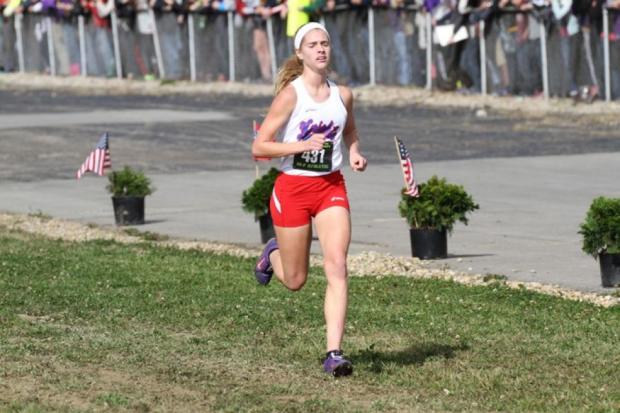 Best time in a 5K race and in which meet?

Tell us how your summer training is going?

It is going great! I'm excited for the upcoming season with my teammates.

What are your goals for the upcoming season?

This season I'm looking to compete at higher competition levels and focus on the present, not the future, so I can get the most I can from each day.

How long have you been running and how did you get started?

I've been running since 6th grade. My older sister ran cross country and track, so my parents talked me into running. I quit volleyball and softball to run.

Will you be competing anywhere out of state this season?

Not during the regular season. During post season, I will be running at nxr in Terre Haute, Indiana.

What is your favorite course to run in Ohio?

My favorite course in Ohio is National Trails Raceway. I've only ran it once, but the excitement and adrenaline I had from that race was incredible.

What meet during the regular season do you put extra emphasize on to compete well at?

Every season West Holmes runners always focus on the Tiffin carnival because it's such a large race. We really have created a tradition out of it and have so much fun running there.

I've had so many memorable cross country races but my favorite memory was at Newark my sophomore year. I ran a personal best by 50 seconds and broke 19 minutes for the first time. It really gave me the confidence I needed for tournaments.
When you are not running what is your favorite thing to do?
When I'm not running I enjoy swimming, playing with my nieces, and spending time outdoors.

"Don't let fatigue make a coward of you." - Steve Prefontaine

What shoes do you train in?

I train in saucony everuns.

What shoes do you race in?

What professional athlete would you most like to meet?

What is something that most people don't know about you?

Something most people don't know about me is I'm left handed and eat pancakes the night before my races.