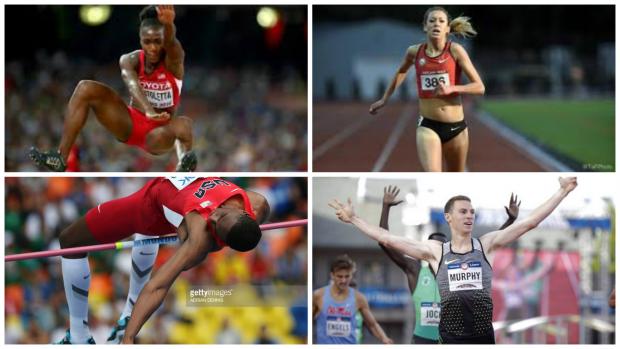 Bartoletta, upper left, was Tianna Madison in HS.  She graduated in 2003 from Elyria.  Emily Infeld, upper right, graduated from Beaumont in 2008.  Erik Kynard,bottom left, from Roger's in 2009.  Clayton Murphy, bottom right, from Tri-Village in 2013.

Tianna Bartoletta (Madison), Emily Infeld, Erik Kynard and Clayton Murphy are the Ohio Rio Olympians. Is being an Olympian one of your dreams?  Do you think you have what it takes?  This is Erik Kynards 2nd Olympiad.  He was 2nd in the High Jump in London with a jump of 7-7.75.  This is Tianna Bartoletta's 2nd Olympiad.  She was 4th in the 100m in London in 10.85 and won a gold medal, running the 3rd leg of the US women's 4x100, which won and set a new World Record.  This will be Emily Infeld and Clayton Murphy's 1st Olympics.  All four were Ohio HS State Champions.  They have an average age of 25.5 years, with Bartoletta being the oldest at 30 and Murphy the youngest at 21.  Infeld is 26.  Kynard 25.

There are plenty of profiles and pictures of all four on the on the internet, but here is a quick profile of them of them as high school athletes here in Ohio.