Thoughts on the OHSAA State Meet

God blessed us with a beautiful day.  The temperature was 55 degrees, perfect running weather, with little to no wind.  The team woke up bright and early at 7 am to eat a good breakfast and get mentally prepared for the race.  I tried to channel out all the hype of the morning and pray as hard as I could.  I felt pressure and even more nervousness than ever before, but I felt confident in that knowing my adrenaline would boost me.  The team made it to the course at 10:15, and hung out until 11:35 when we warmed up a mile and a half on the course.  We got back, stretched, did our drills and strides at the start line, and then met Coach Thomas out at the huddle.  He told us he was proud of the way we ran and was he ready to see our seniors run well in their last races under the Lakota East name.  Not too long after that, the gun went off, and the race then became a reality. 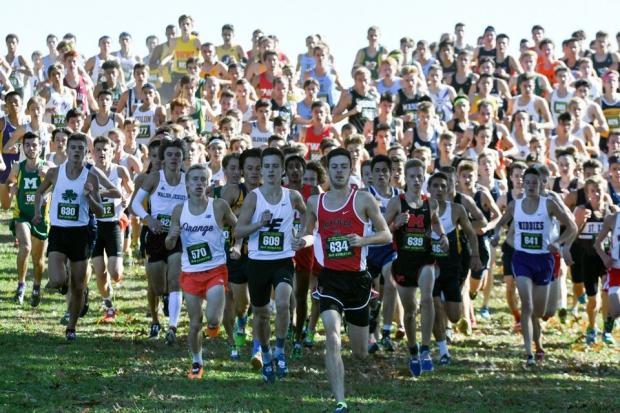 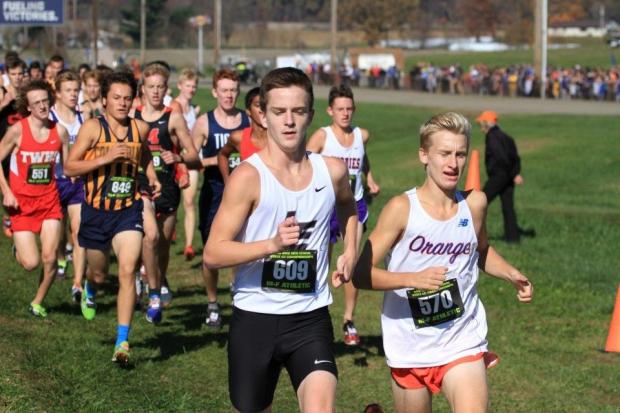 I decided to take the first mile out quickly and make people run after me so that I wouldn't have to play catch up. 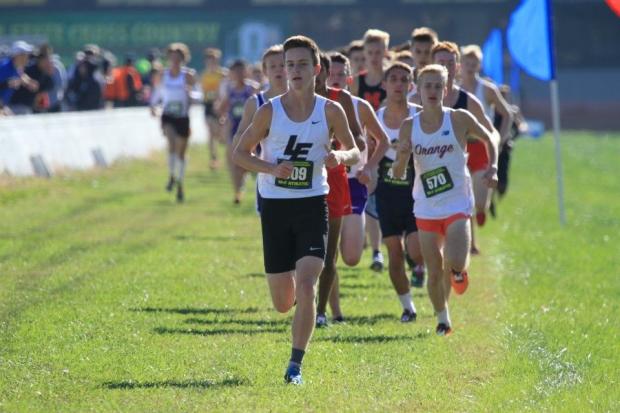 This was my coach's plan from the beginning, and I originally intended to go out in a 4:30-4:35, but I came through the line closer to 4:40 than anything.  The first mile was a 4:39 and although I wasn't exactly happy with that first split, I did as my coach told me to do and remained calm and on pace. 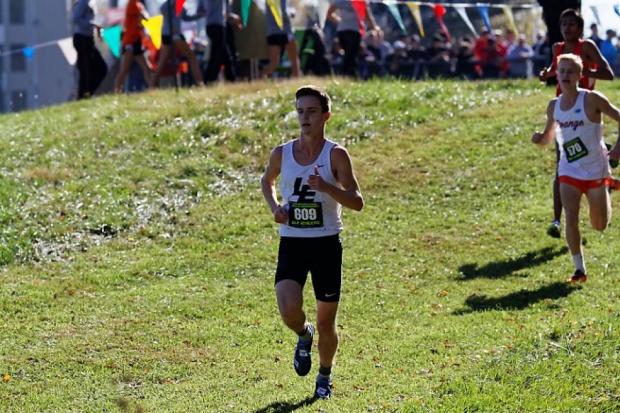 I took the back field fairly hard and made sure I ran the tangents to break open a gap. 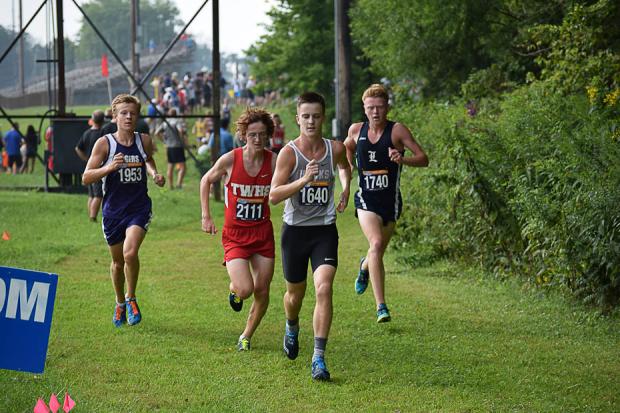 At about the half way point, Hunter Moore of Olentangy Orange made a move I couldn't counter, and ran past me to a lead that ranged from 10-20 yards heading through the two mile.  My split through the two mile was about a 9:36 or so, which was bright for a potential sub 15 time. 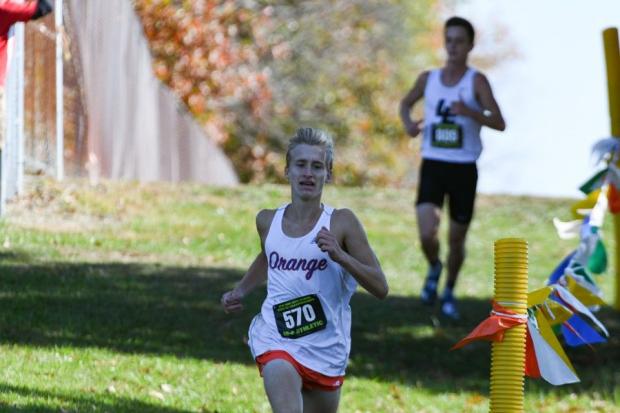 Moore ran about 15-20 yards ahead of me all the way through the two and three quarter mile mark.  The next part of the race is up for complete debate.  Hunter Moore suddenly fell down, did some sort of roll, and quickly popped back up.  From my view, I could see a crease in the course that could have caused him to trip, but I wasn't sure if Hunter collapsed, had simply fallen, or had tripped over his own feet.  What I do know is that it put me closer to Moore, although I was concerned for his health and well-being.  It gave me sort of a glimmer of hope and quite literally put me only 10 or so yards away from Moore.  The adrenaline helped boost a speed up; however, I had already planned to mount the kick of my life in the last 600 meters.  As Moore got closer and closer, I became more energized. 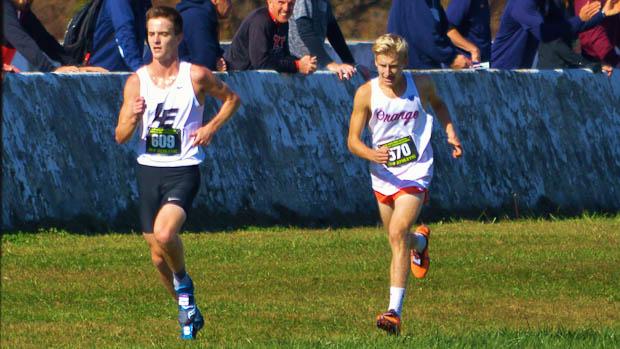 I passed Moore with about 400 meters to go and began to sprint for the line.  My coach gave me a scare in the last 200 meters when I heard him yell that Matt Scrape was coming up on me fast.  Scrape has an incredible kick, so obviously I was alarmed, but I continued on my way with 100 meters to go and looked back for probably the first time in my XC career. 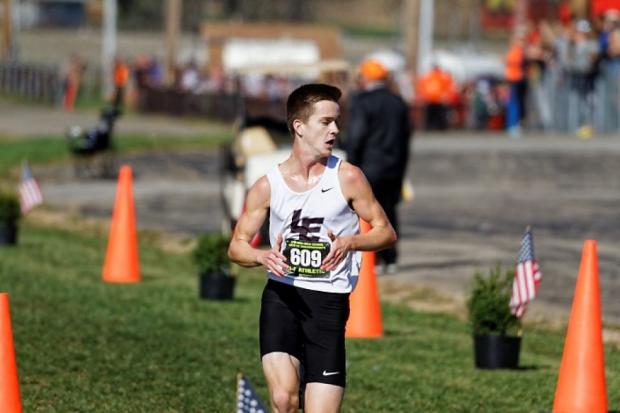 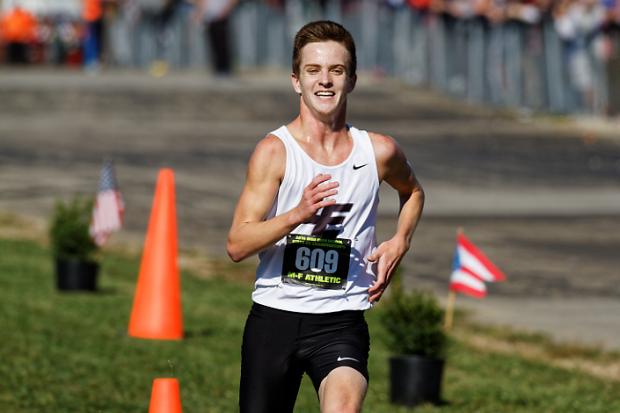 At that moment I began to smile and I then ran through the line with my fingers pointed to the sky, to God.  Right after the race, a wave of emotion overwhelmed me.  I saw Scrape come through, along with Conant Smith, a local competitor.  I attempted to get them both water, but I was ushered to the tents behind me because the people providing water stated that a big crowd was going to be moving through.  As much as that news disappointed me, I did as I was told and moved to the tent where I started shaking hands with competitors coming in.  I got to talk to some of Ohio's greatest runners this year, and quite honestly one of Ohio's best "crops" of runners ever.  I also talked to people I had never even seen before, but I was honored to get to know their stories and share a love for the sport with them.  After all of that was said and done, I had to make sure I was able to see Hunter Moore.  Moore has had an outstanding career for Olentangy Orange and a historical year, putting his name high on Ohio's all time fastest list.  I was just glad I got to run on the course with him and compete as friendly competitors.  I checked in with Moore, and then was swamped by all sorts of media.  After talking to a few people, I finally found my family in the crowd and was able to hug them and celebrate a little with them.  It was one of the most special moments I had ever in Cross Country.  The day was quite remarkable as a whole, but being able to share it with all the supporters, my teammates, my family, and my amazing coaching staff made the event a million times better. 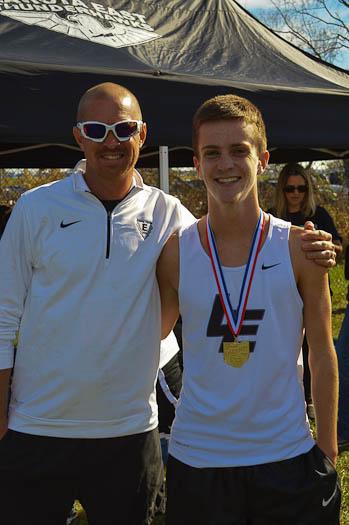 Special Moment:  My special moment this week is thanking my coach, Adam Thomas.  Coach Thomas helped push me to become the athlete I am today, through his confidence in me as a runner from very early on as well as his dedication to the team and I to give us his time (he could be spending with his wife and three children) and help in making us physically stronger.  Before the race and all throughout the week, Coach Thomas told me he believed in me from the very beginning and knew I was going to be able to capitalize on an event like this.  He told me he knew I could achieve this goal of mine and helped construct the plan that helped get me there and get me to where I wanted to be and beyond.  I couldn't be more grateful for having Coach Thomas as my coach, my mentor, and even better, my friend throughout my career.  I'm excited for our future going into next year's XC seasons and two more track seasons.  It's been a privilege to be an athlete under his well-run Lakota East program, and I am extremely blessed to have been coached by such a great all around guy.  I can confidently say that Coach Thomas has crafted me into the runner I was Saturday on that course, and I can't wait to experience more times like that with him again.  Thanks so much again Coach for all you do!