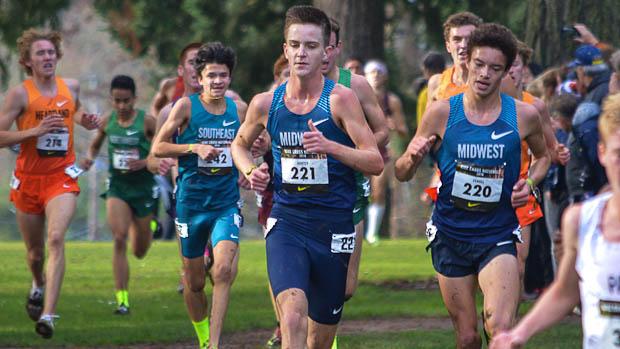 Lakota East Jr. Dustin Horter placed 30th in the 2016 Nike Cross Nationals with a time of 16:11.30.  Here is his last blog of the 2016 XC season.  His best performance, probably not, but he was the 9th place underclassman and will be back next year more mature and with the strength, experience and resolve to be one of Ohio's best ever as he writes his place in Ohio High School XC history.  (photo Myron Horter)

God gave us a beautiful day to run.  The temperature was no more than 50 degrees with no wind.  The course however, was muddy and torn up after the girl's race.  That fact made the race difficult, but that is a big part of the sport, and made the race challenging.  My warm up consisted of about 1.5 miles, I then stretched, and did drills.  Then, I met up with my Midwest Region teammates and walked down to the finish line where introductions were being done.  After we were introduced, we ran to the start line where I finished my pre-race drills with strides.  Shortly after getting there, the gun went off and we were racing.  I was not in the front line coming off the start because our box was only three people wide and I was fourth at the regional.  Despite this, I got out quickly due to the nature of the race, and put myself up near the top 15 or so for a while.  By about the 3/4's  of the 1st mile mark, I was somewhere just below 20th.  I felt good other than the fact that the ground was muddy and extremely unsteady with every step.  As everyone knows, there is no preparing for a course like this in Ohio since the ground is dry and firm everywhere we run throughout the season.  So, I continued to gut it out despite my lack of experience on a course such as this one.  By the two-mile mark, I wasn't even sure what spot I was in, I was just trying to hold on to the people I was with and pass them if I could.  I spotted Gabe Fendel from Indiana who was my "teammate" on the trip from the Midwest, and worked on catching up to him.  I was able to at one point catch and pass Gabe, but on the final stretch, he passed me and came in 28th.  I edged someone out at the line for 30th.  I wasn't particularly happy with my finish in this race position wise and didn't even know what to think about my time at first until I saw that the winning time was 15:29. That made me feel a little bit better about myself, but it was a goal of mine to at the very least gain All American status at Nike.  Initially, I was disappointed about my race, but then I realized that I was up against the nation's best cross country runners and remembered that my season from an Ohio stand point was something I was very proud of.  At that point, I just shrugged the meet off, took it as a learning experience, welcomed in the experience, and began to think about how hard I want to work next year to get back to that position. 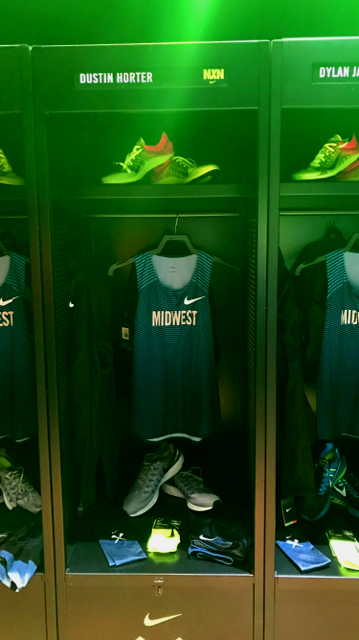 Special Moment:  There were too many special moments on this trip to cover.  A few things I enjoyed were the Gear Up at Tiger Woods Center within the Nike Headquarters.  This Midwest gear up was everything I've dreamed of as a runner since seeing St. Xavier qualify to run the meet a few years ago.  I also enjoyed the guys I was with which included: Danny Kilrea, Jack Aho, Dylan Jacobs (my roommate), and Gabe Fendel.  They were laid back and a nice group of guys.  With four of us being juniors this year, we could potentially qualify back next year as a squad and run together again which would be exciting.  However, personally, this trip showed me that I have a lot of work to do to prove my worth from a national standpoint, in both track and next year in XC.  I thought I was good at XC this year, but this experience has really humbled me and shown me that I have tons of work to do if I really want to own the title "All American" next year.  Regardless of the outcome, the experience I had in Portland is something I wouldn't trade for anything.  I hope to change my previous outlook on the event next year from "a once in a lifetime experience" to a "multiple appearance experience."