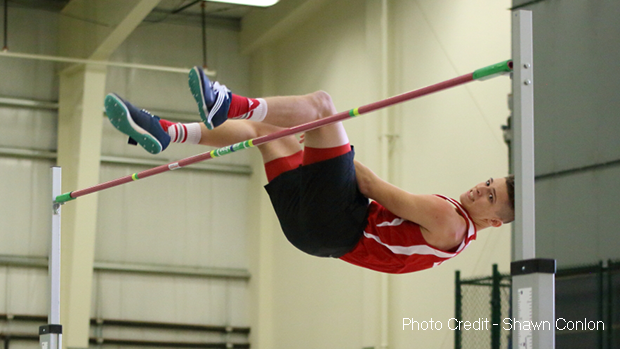 Jeremy Hayton of Hillsboro High School is ranked 1st in the state in the High Jump event.

The 2017 OATCCC Indoor State Championship will take place at the Stile Athletics Field House on the campus of the University of Akron on Saturday, March 4th.

Previously, we profiled some of the D1 match-ups that we're looking forward, so today we'll focus solely on athletes who compete in D2 / D3.

Mia Knight of Beachwood High School will be looking to pull off a double on Saturday in Akron. Knight, who is ranked 1st in Ohio in the 60m, is expected to strongly contend for both the 60m and 200m titles.  She is the top seed in both events heading into State's with times of 7.52 and 25.02 respectively and, although favored to win, she'll be tested by Alysse Wade of St. Peter's Mansfield and Tuslaw's Ke'Aijhan Strong in both events. 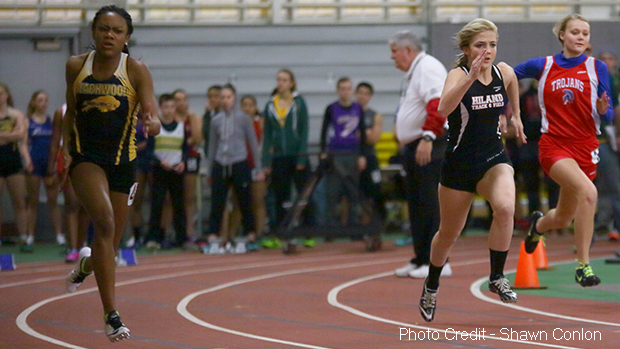 Mia Knight of Beachwood High School is looking for state titles in the 60m and 200m races.

Alysse Wade will also be competing in the 60m Hurdles race where she is recognized as the top seeded athlete entering the state championship. Wade achieved a terrific time of 8.96 at the recent MileSplit Scholastic Showcase at Spire meet.  In 400m action, Ke'Aijhan Strong brings her Ohio #5 and D2 / D3 top mark of 57.27 with her to Akron. 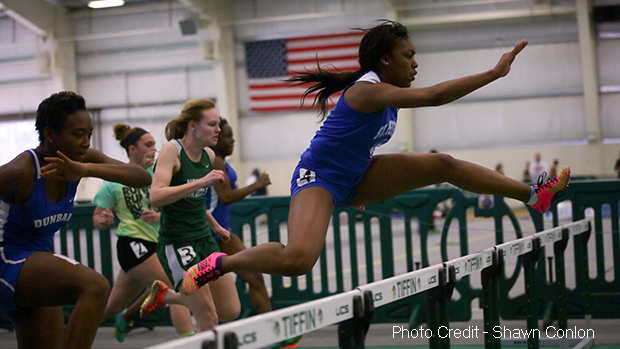 Alysse Wade of St. Peter's Mansfield HS is the top seed in the 60m Hurdles event. 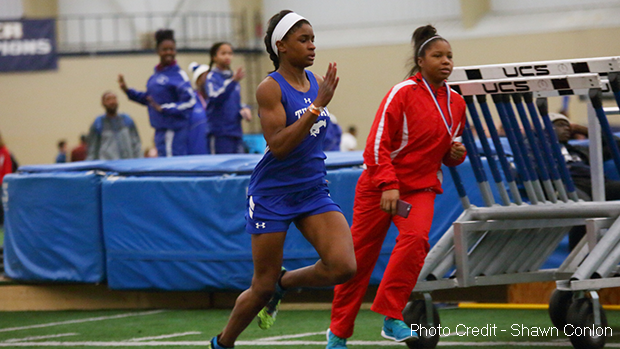 Ke'Aijhan Strong of Tuslaw High School will be seeking the 400m state title in Akron.

In the longer distance events, Western Reserve's Ashleigh Rowley and Maddie Dunlap of Carrollton High School are viewed as the favorite's entering Saturday's action. Rowley holds the top 1600m time in D2 / D3 this season with her 5:08.68 effort at the MileSplit Scholastic Showcase at Spire meet while Dunlap is ranked 1st in all of Ohio in the 3200m event with her stellar 10:55.14 result which was also achieved at the Spire Showcase. Maddie Dunlap will be running XC and Distance events as a member of the Kent State University team next year. 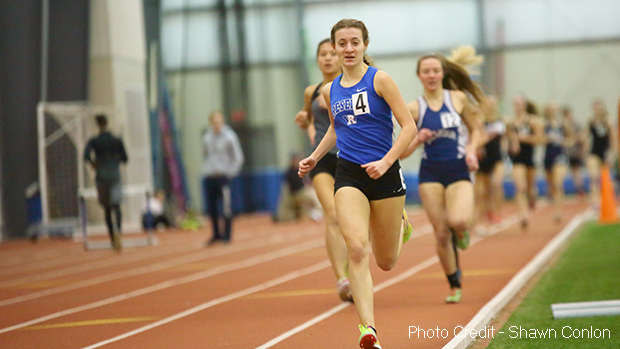 Western Reserve's Ashleigh Rowley is one of the favorites in the 1600m competition. 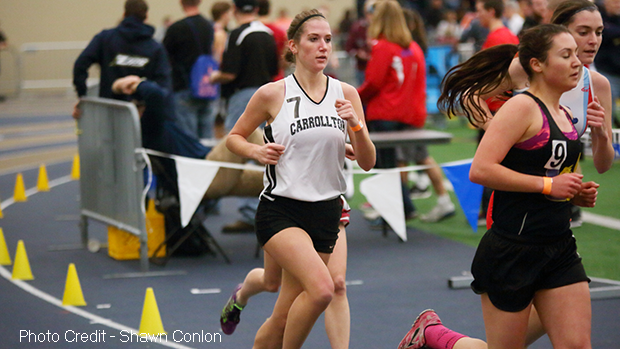 Maddie Dunlap of Carrollton High School is the top ranked 3200m athlete in the state.

Marisa Gwinner and Karlie Zumbro are two of the athletes to look out for in the jumping events. Galion High School's Marisa Gwinner is ranked 1st in D2 / D3 in the High Jump with her 5-7 performance at the Tiffin University High School Meet #3 while John Glenn's Karlie Zumbro leads the way in the Triple Jump event heading into State's with her mark of 34-11 which was set at the recent Akron Rubber City Open meet. 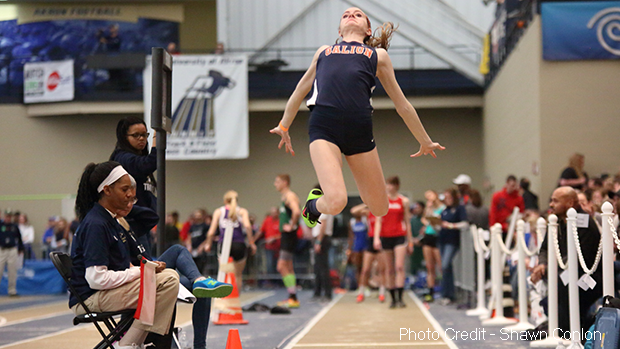 Marisa Gwinner, shown here in the Long Jump, is a top contender for the High Jump title. 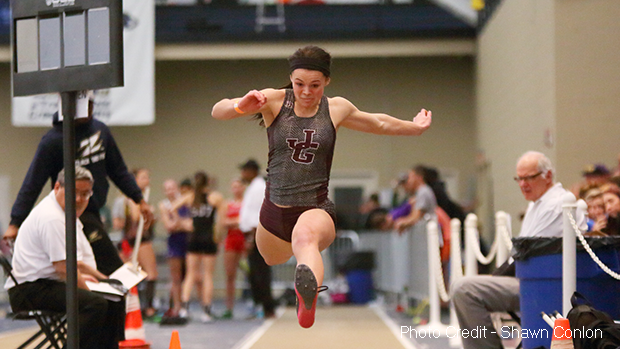 McComb High School's Molly Leppelmeier brings Ohio #1 marks of 58-3.5 in the Weight Throw and 48-7.5 in the Shot Put with her to State's this weekend. Leppelmeier is currently ranked in the Top 5 nationally in both events and this stand-out thrower will be competing next year for Purdue University in Indiana. 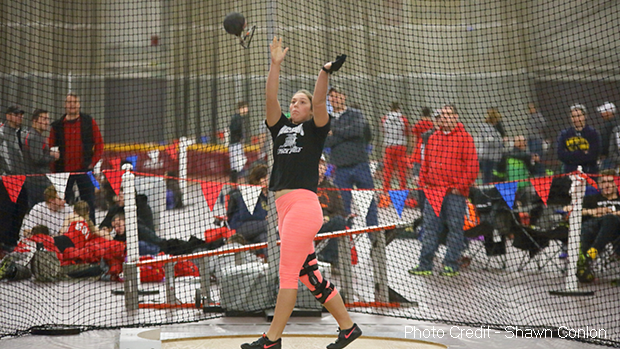 Molly Leppelmeier of McComb HS will be seeking multiple state titles in Akron on Saturday.

In boys 60m Hurdles action, Jacob Mally of Woodridge High School and Dunbar's Jalani Allen head to Akron as the top seeds. Mally, who will compete for Kent State University next year, is ranked 1st in D2 / D3 with his 8.11 performance in January while Allen is 2nd in D2 / D3 with the 8.15 effort that he produced at the recent UK High School Invitational. 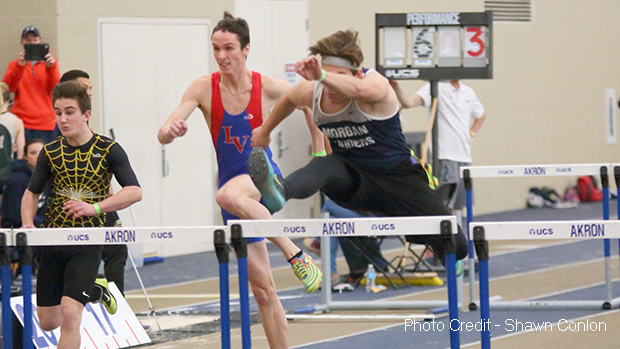 Jacob Mally will look to cap off his indoor high school career with the 60m Hurdles win. 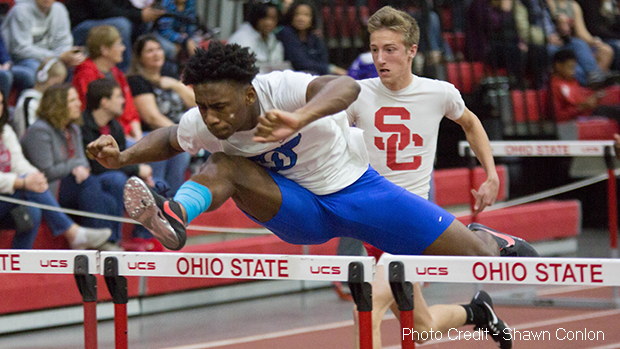 Mason Warnimont of Cory-Rawson High School is seeded 1st in the 200m competition with a time of 22.35 that he earned at the Spire Showcase. He'll be challenged by a talented group of 200m specialists led by Lima Shawnee's Christian Ford and Wayne Lawrence Jr. of Meadowdale High School. 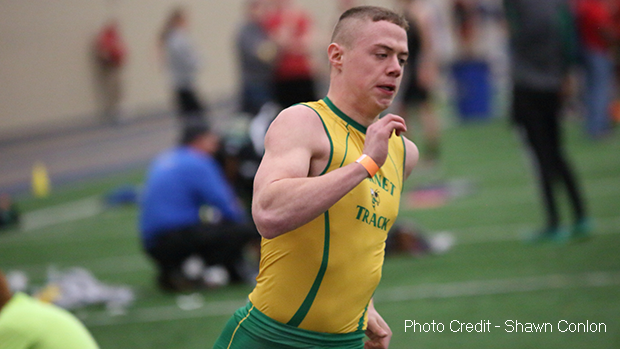 Mason Warnimont of Cory-Rawson HS will face strong competition in the 200m race.

Elsewhere on the track, Chad Johnson of Colonel Crawford High School and Carrollton's Cole Lovett both look to secure the 1600m state title. Johnson is ranked 1st in D2 / D3 with a time of 4:15.73 and Lovett is 2nd on the list with his 4:20.42 performance from the MileSplit Scholastic Showcase at Spire meet. 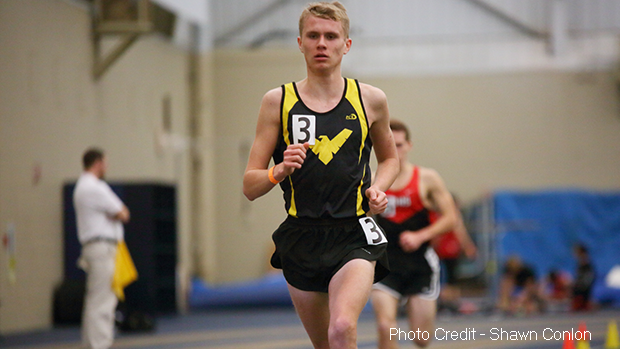 Chad Johnson brings the top seed time in the 1600m race with him to Akron this weekend. 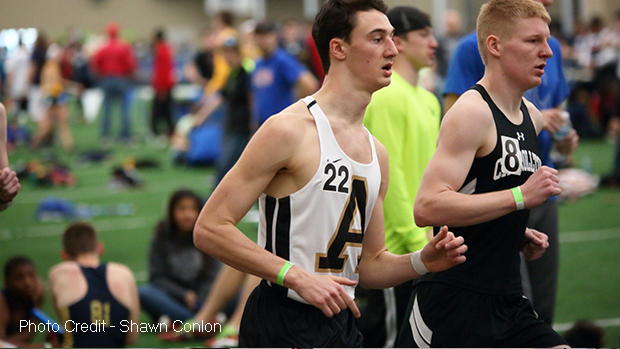 Carrollton's Cole Lovett will look to upset Chad Johnson in the 1600m race at State's.

In the Long Jump event, look for #1 seed Cal Phillips of Kenton Ridge High School to compete for the win. His 22-5.75 mark from the Ohio State University High School Qualifier #4 meet leads D2 / D3. Keyshawn Jones brings his D2 / D3 top ranked Triple Jump result of 42-5.75 with him to Akron.  This mark was achieved at the Tiffin University High School Indoor Meet #3 in February.  Jones of Dunbar High School will be tested by Utica's 2nd ranked Justin Riley and 3rd ranked Tyler Stuber of Napoleon High School.  Hillsboro's Jeremy Hayton is the favorite in the High Jump event heading into State's, as his mark of 6-9 is an Ohio #1 and a tie for U.S. #11. 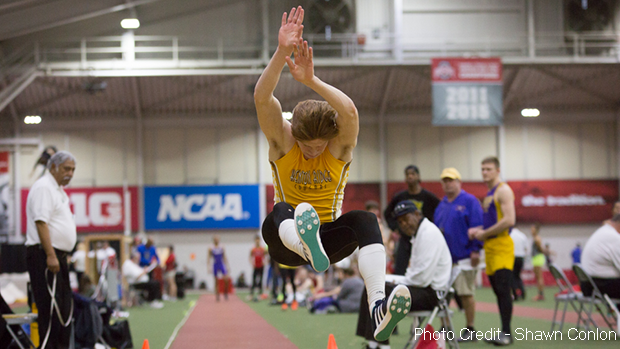 Cal Phillips of Kenton Ridge High School will be seeking the win in the Long Jump event. 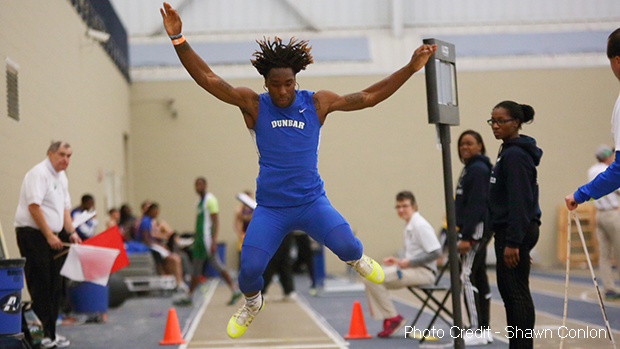 Dunbar's Keyshawn Jones is one of the athletes to watch in the Triple Jump event. 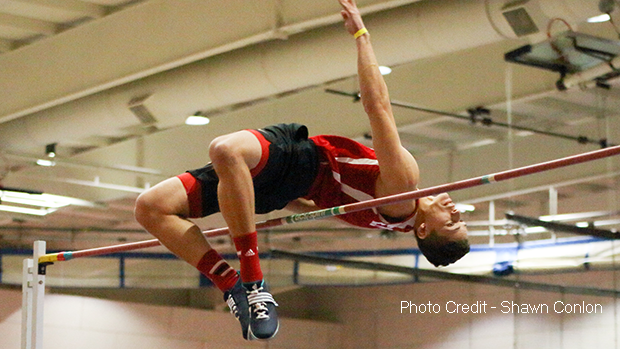 Hillsboro's Jeremy Hayton is ranked 1st in Ohio and in a tie for 11th in the U.S. in the HJ.

Austin Goolsby of Hillsboro High School is the top ranked Pole Vault athlete in D2 / D3 with his 16-2 vault that was achieved at the MileSplit Scholastic Showcase at Spire meet. This result also ranks Goolsby 2nd overall in Ohio and in a tie for 10th nationally.  Lastly, Sam Meece of Napoleon High School is the heavy favorite in the Weight Throw competition, as he brings the event's top seed with him to Akron.  His mark of 68-1.5 from the OATCCC Northwest District Invitational meet ranks him 4th overall in Ohio. 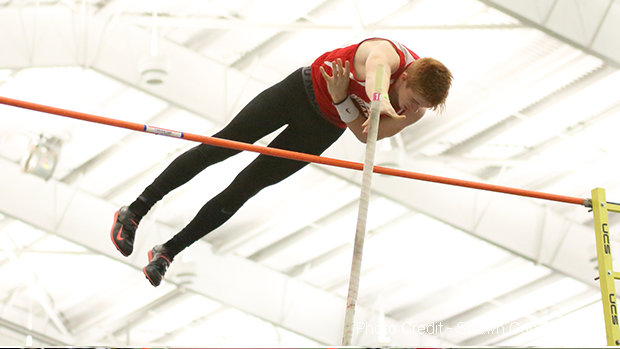 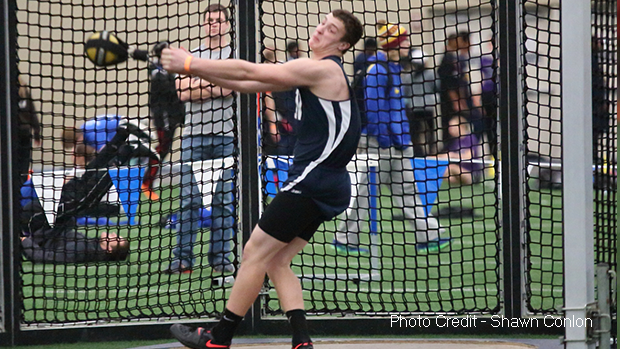 Good luck to all of the athletes who will be competing at the state championship meet; we are looking forward to a day filled with exciting track and field action!

Thanks again to Shawn Conlon for providing the pictures that were used in this article.