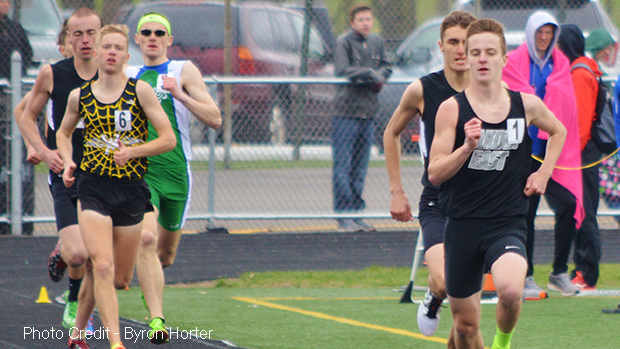 It was a chilly day at the Jack Lintz Northmont Invitational.  The track was wet due to rain the night before and it was windy.  Nevertheless, the team was at Northmont by 8:45 to see the 5K and to prepare for the warm up.  Everyone was very eager to go out and run to warm themselves up.

When it was time to warm up for the 1600m race, I was in three sweatshirts and I was ready to run! Dan Leonard and I ran a 1.5 mile warm up, we did some drills and some strides and we were then prepared for the race.  At this point, I had broken a sweat and I was feeling pretty good.  As the gun went off, I immediately did what I usually do in every race - make sure that I'm near the front.  I was in lane 1 so I had no issues with cutting in.  I managed to clip off a 28 or so first 200m and I felt good doing it.  I accelerated out to the 400m mark and I came through exactly where I wanted to in 61 or 62.  At this point, I got onto the back stretch and the wind hit me.  This is where I began to fall off.  I ran 1:07 for my next lap, which I was astonished by.  I felt like I was going faster, so I continued to push harder and harder, reaching the 1200m mark in a 1:06.  At this point, I was completely isolated from the field and I had to work alone to manage a 1:05 last lap.  As mad as I initially was with this race, I needed to realize the competition and the wind had huge impacts on my time.  I've been able to clip off consistent 61, 62 and 63 400m intervals in practice, so it's just about making it all click and come together on race day.  Regardless of the result, I needed to forget about this race that I wasn't too happy with and move on to the 800m event. 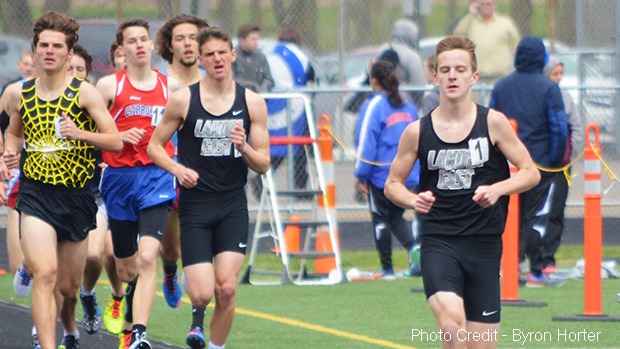 I did another 1.5 mile warm up between the 1600m and 800m, another full set of drills and strides and then I felt ready to go. The 800m is always a race that I have competition in, so I was expecting there to be a few guys that could stick with me.  One name that stood out to me was Daniel White from Watkins Memorial, who ran the 5K and came back for the 800m, along with Jackson Siddall from Lebanon.  I had raced both of these guys before, but never in an 800m.  As the gun sounded, the crowd of runners sprinted out in a tight-knit pack.  When we reached the first 300m, everybody cut in and I realized that both Jackson Siddall and Daniel White were close to me.  At about the 350m mark, Siddall darted right past me to take the lead into the bell lap.  Having been on both sides of this situation before, I knew I had to be patient with Siddall and pull him in slowly.  He had the lead with 200m to go, but I never counted myself out and I felt like I was in a good position to catch him with 150m to go if I needed to.  I was extra patient with myself and I waited until about 100m to go and I made my move on Siddall, which was too much for him to match with such a short distance to go.  I was very proud of my execution in this race after such an unexpected move from Jackson Siddall and I have to give him a lot of credit for pulling me along.  I ended up with a 1:57.47, which I was pleased with.  It was an open P.R for me. 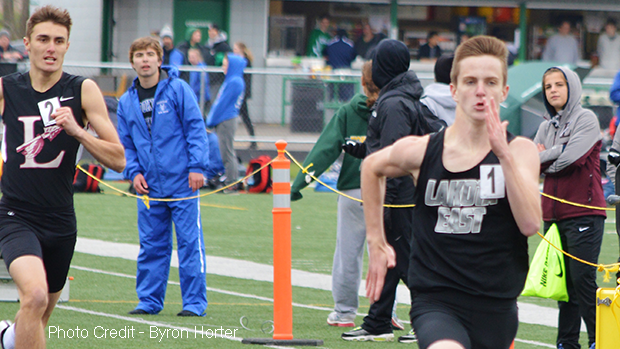 Moving on from that race, I did another full warm up and then I stretched. This was my first 4 x 400m relay since early in the 8th grade, so I felt a little uneasy about it at first, but I became more excited and anxious than anything.  As the gun sounded, I waited on the line as the 2nd leg.  When the 1st leg of our relay team came in, another team's runner collided with my teammate and this delayed our hand off by at least one or two seconds.  Feeling set back and not wanting to let my team down, I ran aggressively to try to catch up to the other runners.  I went out in a 26 for 200m and I was flying from there.  I managed to pass 4 of my competitors and I boosted my team to at least 3rd place, but I wasn't sure exactly where we stood at that point.  I ended my split in a 52, which surprised my coaches.  They didn't think I had that type of speed.

Overall, the way I bounced back after the 1600m made me happy.  I was able to have a lot of fun that day, while also putting in 8 miles of distance in total.  The theme of the day across all races was to never count myself out, no matter what and to keep working hard.