You may recognize Shawn Conlon as being a key member of MileSplit Ohio's stable of content contributors and well, that would be correct.

He's been tasked with taking photos and acquiring video footage on our behalf at cross country and track and field meets throughout the state for a number of years now.

And while, luckily for us, he still does that, he's also branching out and in the process of writing his own book. The theme of Shawn's writing is the history of Hillsboro High School's track and field program. He goes in-depth on the school's all-time greatest athletes and provides detailed listings of state champions, area record holders and top overall performances. Conlon has pegged sometime late in the year 2021 as his anticipated release date.

Why Hillsboro and why track and field as the topic for his book?

Well that's an easy one. Conlon lives in the greater Hillsboro community and he's had three son's go through the Indians program: Mackenzie, a 2016 graduate, who currently represents Otterbein University in multi-events competition, Quinn, a 2019 grad, and Kieran, presently a senior, have all suited up for the team.

Aside from the family ties, Shawn is a former track and field athlete, a former coach and a true historian of the sport. He was gracious enough to provide us with a sneak peek of his book and shared an excerpt, which highlights 1911 graduate, and standout thrower, Harry Roads.

Review below a breakdown of Roads' vast list of accomplishments and enjoy some fantastic images from well over 100 years ago. 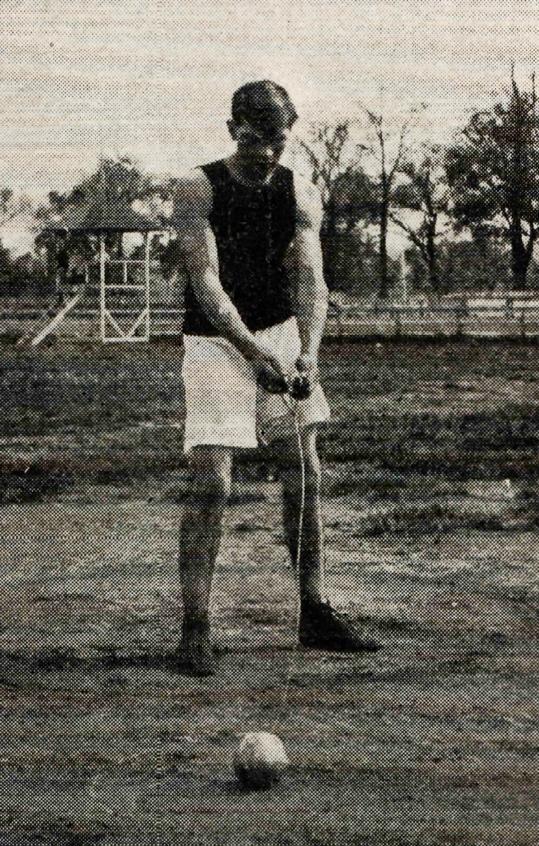 Harry, shown above putting in his final preparations, before a competition-based throw. He is Hillsboro's school record holder in the hammer event.

Harry Roads won seven COIAL (Central Ohio Interscholastic Athletic League) championships during his high school career. He took victories in his marquee event, the hammer throw, four consecutive years (1908 to 1911). No other athlete at Hillsboro has ever won an individual event four times during their high school tenure. In 1909, he was also the league champion in the shot put. Additionally, in both 1910 and 1911, Harry won the CIOAL championship in the discus competition. He was the league's runner-up in the shot put in 1910 and just to show that he could mix it up on the track, as well, he collected a 2nd place finish in the 880 yard run  in 1908.

During the 1911 season, Hillsboro also competed in the Tri-State Interscholastic Field Meet at Miami University in Oxford.  With the demise of the CIOAL, after the 1911 season, this would be the closest thing to a league meet that Hillsboro participated in until the eventual forming of the South Central Ohio League (SCOL). Roads won three TSIF championships in 1911 -- the shot put, discus and hammer throw events.

A testament to their dedication to the sport was that the duo commonly traveled to meets together, paying for their own transportation. They were said to have a tendency to buy newspapers and bean soup following their competitions, which often led to difficulty in financing their train ride home.

In 1910 Roads won the state championships in the shot put, hammer throw and the discus and included in those victories was a state meet record breaking effort in the discus. He was also the high point scorer at the meet and gave Hillsboro a third place finish based solely on his points.

During his senior year Harry again won both the discus and the hammer throw and was, once more, the high point scorer at the meet, giving Hillsboro a fourth place finish in the team standings. He remains the state meet record holder in the hammer to this day as they stopped running the event in its official capacity in 1916. Each of his three championship throws were further than any other throw in state meet history and the record is twenty-seven feet further than the next best throw.

At the time of his graduation, he held Hillsboro's school records in the shot put, discus and 880 yard run.

Harry continued his athletics career at Ohio State University. His specialty there was the hammer throw, but he also contested the discus event at some meets. From 1914 to 1916 he won the Big Six Championships in the hammer throw with his effort in 1916 being a league record (at that time) of 132-09. The Big Six Championship included all of the major colleges in Ohio and was the premier meet of the year.

In 1915 Harry was the fourth place finisher in the hammer throw at the Western Conference Championships, which was the predecessor of the Big Ten and included sixteen different colleges and universities.

Harry was the school record holder at Ohio State in the hammer and also the state record holder for college athletes at the time of his graduation. Among his biggest fans was his brother, Conger who once served as the captain of Ohio Wesleyan University's track and field team.

Following his days at Ohio State, Roads settled in Sunbury, Delaware County and worked as a farmer. According to the Hillsboro Press Gazette, Roads died in June of 1966 at the age of 75.