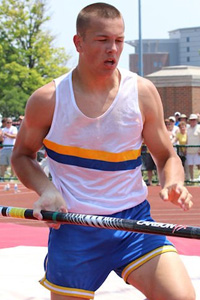 Jacob Blankenship, who will be a senior next year at Gahanna Lincoln, has been selected as part of Team USA for IAAF World Youth Championship in Lille, France.  Blankenship qualified for the team by winning the Pole Vault at the USATF World Youth Trials in Myrtle Beach, South Carolina with a jump of 4.90m (16-0.75).

Blankenship will compete in the qualification round on Friday, July 8th at 9:30am (3:30am Ohio time).  If he qualifies for the finals he will then compate again on the last day of the meet, Sunday, July 10th, of the IAAF World Youth Championship for a medal at 4:00pm (10:00am Ohio time).