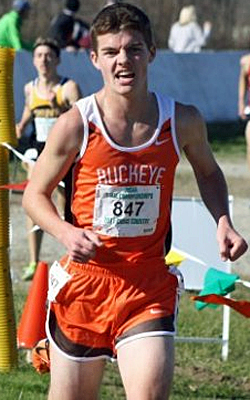 -Best time in a 5K race and in which meet:

-Tell us how your summer training is going?

Summer training is going great.  I feel strong and I'm carrying a lot of my speed from track season over to cross country training.  I'm healthy and getting fit for the season.

-What are your goals for the upcoming season?

My goals for the upcoming season are to improve my personal record by at least 20 seconds and compete for the D-II state title.

-How long have you been running and how did you get started?

I've been running for six years now. I started up in junior high with my friend Mick Iacafono, who runs for St. Vincent-St. Mary. His father was the coach at our junior high, and he really developed both of us so we could compete well in high school.

-Will you be competing anywhere out of state this season?

I am not going to be competing out of state during the regular season. As for the post-season, that will depend on how I feel in November.  If I'm healthy and I don't taper too much for Regional and State competition, I might try to test my strength at Footlocker.

-What is your favorite course to run in Ohio?

Galion is my favorite course in Ohio.  The course itself is relatively flat, but the race organizers have the grass mowed to about nothing, so it's just like you're running on a grass track.  All you really have to do is stay clear of the roots in certain parts and you can just fly.

-What is the toughest course to run in Ohio?

The toughest course to run in Ohio is definitely the Woodridge CVNP Invitational course.  My coach actually stopped taking the team there after my freshman year because it was so difficult .  The hills there are just massive, and every time you get to the bottom of one you have to start a climb up another. The only good thing about the course is that the finish is straight downhill.

-What meet during the regular season do you put extra emphasize on to compete well at?

I put emphasis on competing well at all races, but the one that I really mentally prepare for every year is Tiffin.  At the Tiffin Cross Country Carnival, I really push myself to compete to the best of my ability.  It gives a good indicator of what I can expect to run at the Regional meet, since Buckeye is in the Tiffing Region as well.

-What is your favorite cross country race so far in your high school career?

I'd have to say that my favorite race so far was the State Meet during my junior year.  I really competed well that day, and I managed to beat quite a few guys who had beaten me during the regular season. It was a real confidence boost to know that I belonged up in the front with some really great runners.

Crossing the line at the Tiffin Regional my freshman year. I had placed 16th, and I was completely exhausted.  I had barely made it to the State Meet, and I was ecstatic.

-When you are not running what is your favorite thing to do?

Spend time with my brothers and friends.  I'm the middle child of five boys, and all of us are really close.  My friends are just fun to run with and talk to.

"Champions do not become champions when they win the event, but in the hours, weeks, months and years they spend preparing for it. The victorious performance itself is merely the demonstration of their championship character." -T. Alan Armstrong

-What's on your Ipod when you go out for runs?

What iPod? I can't stand music when I'm running, even if it's my own. I prefer to just focus on the run.

-What professional athlete would you most like to meet?

If I could meet any professional athlete, I would most like to meet Dathan Ritzenhein.  As a professional runner, he's competed internationally for the United States, and I'd really just like to talk to him about racing outside the U.S. and training under Alberto Salazar.
Tweets by OHMileSplit