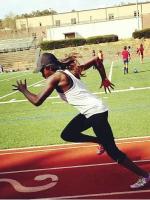 Bryaña Robinson signs her NLI with the University of P...
Bryaña Robinson from Pebblebrook HS signed her NLI with the University of Pittsburgh.   ...
Atlanta Track Club's Weekend Highlights from 3/29...
It was wet, wild and very windy this past weekend  as Georgia&#39;s best survived the inclimate weather and persevered putting up some sterling Silver MileSplit National Elite Marks and Times.  Clic...
6A Girls Team Power Rankings thru 3-25...
McEachern&#39;s Girls actually have a very slim lead (as they are top heavy in the Sprints) over rivals Marietta and super speedy Westlake. What will transpire between now and Regions will prove quite...
Atlanta Track Club's Weekend Highlights from 3/21-3/22...
What a great weekend of Track and Field it was once again down here in Georgia!  Day 1 of the Cobb County Championships was sick..making MileSplit national headlines with Brandon Miles taking notice!...

Many of Georgia's best in track & field are found in Co...
Arguably the best county in the state of Georgia for high school track & field held the first portion of their county championship meet this past weekend. Cobb County, which includes Northwest suburbs...
Georgia HS Tracksters Perform Well at New Balance Indoo...
With the GA HS Outdoor season in full swing (almost half way thru the regular season) about 20 athletes made the long trek to The Armory in New York  to compete against the best Indoor athletes in th...