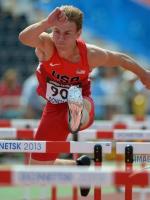 Head of the Class: Top Returners from the Class of 2014...
Are you the best freshman, sophomore, junior, or senior? Where do you stack up against your peers? Find out in a new rankings feature we like to call Head Of The Class....
Division III track: Academy boys dominate; girls come i...
Columbus Academy dominated a Division III boys track regional at Fairfield Union, earning state qualifiers in 11 events. The Vikings amassed 133 points to just 47 for runner-up Seneca East. Jon Mi...
Junior Olympics Opening Day...
...