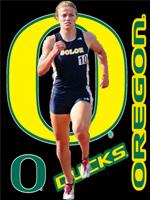 Therese Haiss - Stronger and Faster than Last Year...
Solon Senior and Oregon signee Therese Haiss is the defending D1 Outdoor State champion in the 800 and the State runner-up in the 1600.  She was recently 3rd in the 800 at the Brooks PR Invitational ...

Brooks PR Invitational Buckeye Connections - Therese Haiss
The Buckeye State will be represented in Seattle at the end of the month when Therese Haiss of Solon heads out to the prestigious Brooks PR Invitational.   Select elite athletes were sent a golden ti...
Northwest Review 9...
Elijah Armstrong of Pocatello In the northwest Oregon & Washington runners made their final adjustments prior to their State qualifiers & Idaho runners ran their qualifiers.  The big news was on ...
Northwest Review 8...
girls action at Concordia (by Craig Rice) Adidas Concordia was the highlight of the week with Andrew Gardner & Ella Donaghu topping the bill.   Around the nation it was the return of Edward Ches...
Northwest Review 7...
Katie  Knight at Eagle Island   Katie Knight & Kai Wilmot of North Central scored impressive victories at Richland to top action in the Northwest....
Northwest Review 5...
Katie Knight, Amy-Eloise Neale & Ella Donaghu recorded major victories for the girls and Joe Hardy, Patrick Gibson & Matthew Maton scored for the guys this week.  Of course there was plenty of action...