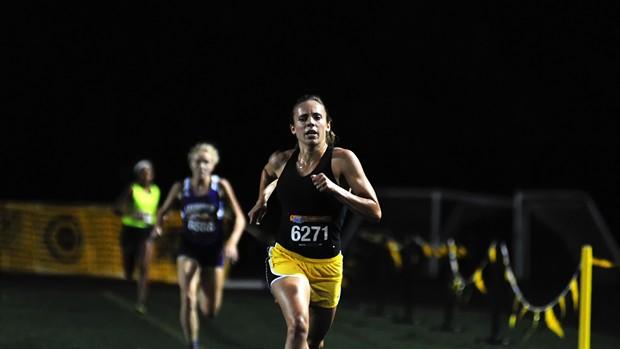 I searched. There were many PR's and great performances run throught the State as we near the Midway part of the 2015 XC season. Each week we have had several standout performances. I decided that the past week was a no vote. In perhaps the best race of the season thus far, one that featured the top 4 girls in the State and the top girls teams in each division, all in one race, Centerville Sr. Lainey Studebaker used her track speed to out sprint five other girls over the last 500m to win the Girls Varsity 1 race at the Saturday Night lights in Centerville. Her time of 17:33.36 was a new course record, a PR and an OH #1, US #18, at this time. In fact, the first six girls were all well under 18:00. Congratulations to Lainy Studebaker of Centerville for the best performance of the week.

One quick note: the second best performance of the week goes to Kelli Walsh of Centerville for her video bomb as seen our interview with Lainey. Kelli is a So. at Centerville and was 7th in the race with a time of 18:22.21. Congratulations Kelli!