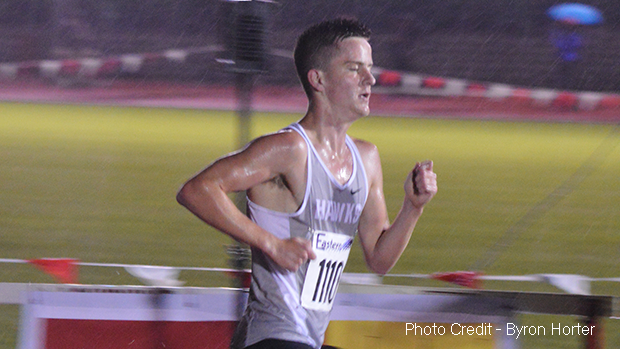 Unlike past years, Friday night at the Eastern Relays was rainy.  The conditions weren't typically ideal for huge P.R.'s, but with the wind dying down because of the rain, the weather became more manageable.  I began to warm up with my normal 1.5 mile run as the rain began to stop.  When I got back, it was time to stretch and do drills as well as strides.  I knew my biggest competition in this race would consist of the Ohio runners and I expected it to be a tight race between that bunch.  When we finally got ready to go, the rain picked up again and we walked out on the track already soaked and cold.

When the gun went off, immediately people scrambled out of the blocks to gain position.  It wasn't the friendliest start I've ever been a part of, but I was able to make it to the front with virtually no problem.  I was soon accompanied by two other athletes, the main three I was expecting to be together.  We created an early separation from the other core pack by about 10 meters. Trading off the lead early on, we came through in about a 1:05 first 400m.  It was slower than I wanted to go out in, however I had to adapt to the situation.  We went through the next 800m and 1200m in 1:07 splits and remained rolling fairly consistently with those kinds of splits for the rest of the race.  Zak Kirk jumped to the front after the first 1200m and that's what truly got me going.  The increase in pace helped boost me to where I wanted to be and I passed Kirk on the back stretch of the 4th lap.  I then came through the line in a 4:28 mile, sub 9 minute pace.  I continued to try to create separation between myself and the core pack behind me.  God helped me push through it for the rest of the way. I felt good through the first 6 laps as I kept a consistent 1:07'ish pace.  I never realized how far away the runners behind me were, but I knew that I had to keep going faster and faster.  At this point, I was racing against the clock to drop the sub 9 minute barrier that I wished to break.  With a lap to go, I felt smooth and I brought out the form that I get laughed at for (my coach is finally realizing how effective it really is with 200m left to go).  I came through the line in 8:56.62 and I felt good doing it.  Andrew Jordan and Gavin Gaynor's wish of passing the Eastern Relays torch off to me was fulfilled (in a slightly less impressive fashion).  At the end of the race, the gunman gave me the shell he shot off that started the race; a nice token that I'll cherish for my first of what will hopefully be many sub 9 minute races.  My coach ran up to me after the race and told me it was a solid statement race.  I think Coach Thomas was really excited after this race as it brought out all kinds of emotions in him and my teammate Max Sellers described him mid race as a 'glass case of emotions'.  It was a good day for the Hawks and to top it off, Max Sellers ran a 10:07 (5-6 second P.R. in the race).  After making a short trip to Taco Bell, we headed home for the Lakota East Jason Lindsey Invitational. 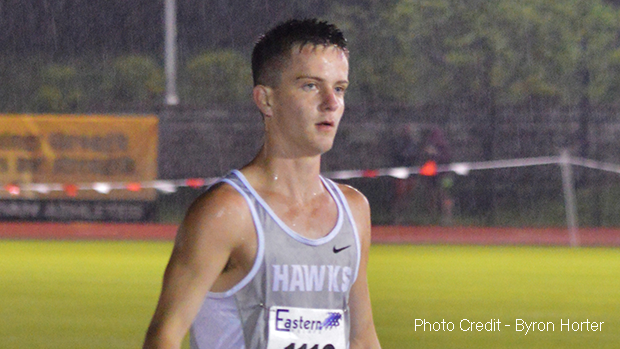 Dustin Horter set a new P.R. in the 3200m in less than ideal conditions at the Eastern Relays.

About 12 hours later, Max Sellers and I began to warm up for the 800m race at our home meet.  This was an important meet for our team as a whole and it was important that Max and I contributed to it. We warmed up with our usual 1.5 mile run, stretched, did drills and strides.  I wasn't exactly expecting too much competition in this race, but I knew that Conant Smith, a strong Middletown High School runner, was there to run a fast 800m too.

The gun blasted and I had no problem getting out.  Conant Smith and I were side by side on the back stretch and we came through 200m in 27 seconds and this was perfect.  As we came around the second turn, we were still close and rolling.  Through 400m, we were at 54 seconds.  This is pretty fast for an 800m race generally, but it fit perfectly with my style.  Still close to each other, Conant and I worked together to grind out a tough 100m through the wind and to the last 100m where I was positive he would attempt his final kick.  I noticed that Conant moved out into lane 2 and I knew from there it would be a battle.  Never doubting my own abilities, I gave it everything that I had left during the last 50m and I came through the line in 1:54.96 with my competitor not too far behind in 1:56 flat. I was very happy with a 2.5 second open 800m P.R. after Eastern Relays and I'm sure Conant Smith posting  a 1:56 result after telling me that all he wanted to do was go sub 2 minutes was a pleasant surprise for him as well.  Look out Ohio!

Both the women and the men of Lakota East High School won the meet.  It was a nice confidence booster for our team and a successful day overall.  It was also our school's prom night, so I cooled down for 8 miles to top off the day and then I headed to the prom.  I'd be lying if I said it wasn't tough, but it was one of the best decisions that I have ever made.  It was a very good weekend. 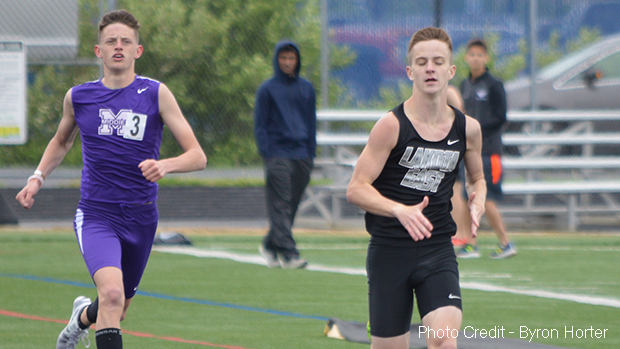 Dustin Horter won the 800m race at the Jason Lindsey Invitational in a time of 1:54.96.