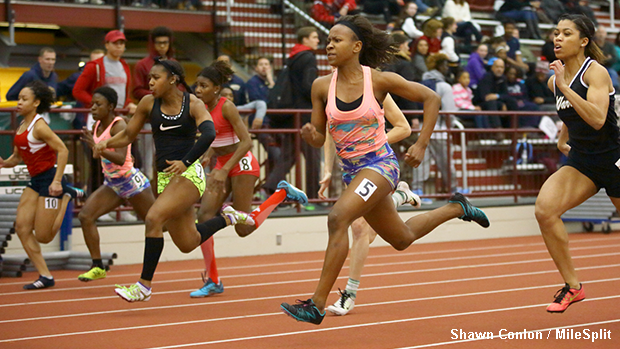 Lanae-Tava Thomas (#5) claimed a pair of event wins at the 2017 SPIRE Showcase.

One of the country's best athletes has confirmed that she'll be competing at the 2018 MileSplit / SPIRE Scholastic Showcase.  Lanae-Tava Thomas will be making the trip to Geneva to defend her titles from the 2017 Showcase!  The Rush Henrietta Sperry senior had an incredible day at last February's meet, as she took 1st place finishes in the 200m and long jump events.  She also won the 60m and 200m races at the 2016 Showcase with her outstanding times of 7.44 and 23.90.  Her 7.44 60m clocking represents her pr at the distance.

Lanae-Tava Thomas has extensive big meet experience to draw on when she competes at the 2018 Showcase; the New York native has been a regular at New Balance Nationals Indoor, New Balance Nationals Outdoor and the USATF National Junior Olympic Track and Field Championships during the last few years.  The future USC Trojan is the top ranked athlete on the current MileSplit 50 indoor list due, in part, to her great start to the season.  She's already picked up wins at the Ithaca College Bomber Invitational (55m and long jump) and the Section 5 RWTL #2 meet in Rochester (300m and triple jump).

* Her stellar indoor pr's include:

* A reminder to any athletes out there who want to test themselves against the nation's best, registration is currently open for the 2018 MileSplit / SPIRE Scholastic Showcase: