Talk with East Canton head cross country coach Lee Sternberg for a few moments and it's not hard to wrap your head around the fact that he's entering his 46th year at the helm of the school's program.

It's also not hard to imagine that he's led his teams to two state titles and three runner-up finishes over that stretch, or to suppose that they could very well end up on the top step of the podium in Hebron again this season.

Sternberg is high energy, and it's clear that his passion has been, and remains, the generator powering the Pacmen year after year. Heck, find a way to plug an actual Pacman arcade machine into him, and chances are it'll run just fine, too.

And yet with an experience-laden returning squad like Sternberg has this year, you can hardly blame him for his enthusiasm. Especially when that squad is led by junior Demetrius Snellenberger.

Snellenberger, who finished fourth at last season's DIII State Championship as a sophomore, will contend for the individual title in DIII, with a showdown likely set between him and several other returners, including seniors Joe Ballas of Fort Loramie, Julian Shrock of Garaway, and Drew Roberts of Mapleton.

According to Sternberg, Snellenberger has adapted well to becoming an upperclassmen.

"Last year [Demetrius] had a young runner with him named Josh Conrad. Josh was a senior and an 800-meter champ, anchor of the 4x8, 4x4, high jump. And he led all the workouts and Demetrius would be running right with him. Well this year now Demetrius is taking charge, and he's looked really good," Sternberg said. "I'm excited for his chances, he works as hard as anybody right now." 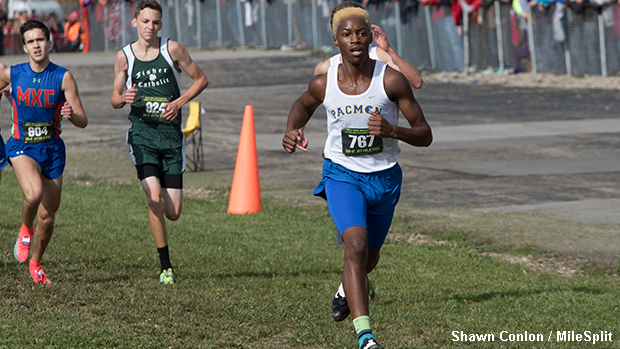 Demetrius Snellenberger can lean on the big meet experience he gained last year.

Snellenberger will be joined by senior Kyeem Newell-Owens, junior Mason Cain and senior Colt Hemphill in the effort to deliver the program's first ever back-to-back state titles. Snellenberger, Newell-Owens and Hemphill will all enter the year having already run in both track and cross country state championship meets.

A significantly-improved sophomore in Alex Yarian is also expected to make an impact this season, Sternberg said, as well as freshmen Landen Demos and Gabe Shilling, who have both run under 19 minutes.

Success has also sowed seeds for more success, with the state title boosting numbers on the team to 16, the second most in school history.

However, the team lost its captains from last year in Josh Conrad and Tony Cappillo - both seniors who finished 31st and 54th respectively at the state meet - meaning a leadership role will have to be filled. But leadership will not be a sparse commodity on the championship-seasoned team.

"Colt and [Demetrius] are our captains this year, and they're doing an outstanding job of being leaders right now," Sternberg said.

Still, East Canton's road to the top of the podium on November 3rd will not be easy. They'll first and foremost have to go through a McDonald team who finished second to the Pacmen last season by 20 points and brings back all seven members of their team. They'll also face serious challenges from the likes of Fort Loramie and Mount Gilead. In preparation for the postseason, Sternberg says his team will face their biggest tests at the Boardman Spartan Invitational on September 15th and at the Stark County Championship on September 29th.

For Sternberg, though, another gold shouldn't be, and isn't, his team's focus.

"We don't need to say, 'Oh man, we can win another state championship.' It's not like that at all. We just take it one race at a time, we want to do the best we can, and hopefully we end up peaking at the right time," he said. "As far as repeating, I tell the kids to drown out the noise...But I like our chances."