Of all of last year's cross country state champions in Ohio, there may be no other team more equipped to repeat than the Hudson boys in Division I.

They've been voted to Ohio's top spot in the coaches poll consistently this year and it appears that they lack formidable competition returning from last season - they beat second-place Hilliard-Davidson by 70 points at the 2017 OHSAA State Championship.
What's more, they return five of their top seven from last season and will be led by a loaded senior class already experienced in knowing what it takes to win at the state meet.  Three of those seniors - Adam Beucler, Evan Manley and Jacob Russo - come into the year motivated by legitimate hopes to take home three top 10 finishes, if not an individual title for one of them, if they can manage to outlast Middletown's Conant Smith.  Beucler, Manley and Russo finished 11th, 16th and 50th, respectively, at the state championship in 2017. 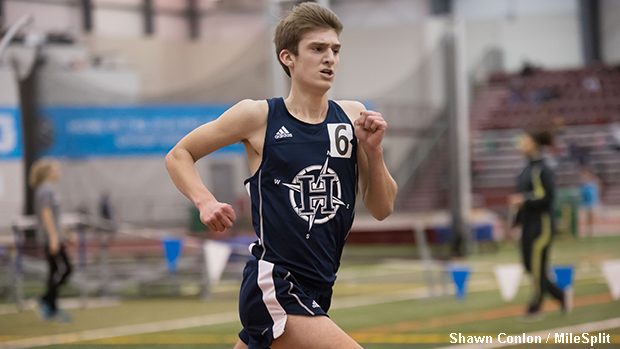 Senior, Adam Beucler could contend for the individual championship at the DI state meet.

Head coach Mark McConnell said he expects those seniors to occupy leadership roles in 2018.  McConnell, who achieved his first state title as a coach last year with a young team, also said he doesn't plan to make any dramatic changes to his team's training this season.

"As far as structure, it's very similar to last year - if it isn't broken don't fix it just tweak if necessary is kind of the motto," he said.  "But they're a year older so expectations of being able to do more work goes with it, so they're doing things whether it might be higher intensity or mileage, but it's not anything that they can't find in a running book anywhere.  It's just to get them bought in and then that creates teams that finish fourth or teams that win."

But training is different than mentality and mentality is highly vulnerable to change after winning a state title.  As such, Russo says that for the time being he and the rest of the team are trying to forget about last season.

"We approached this year very differently," Russo said.  "We of course enjoyed the state title from last year's cross country season, but this year instead of focusing on what we did in the past, we are training as if we haven't achieved anything quite like that yet.  We're training harder than before and we're just as hungry as ever."

"I expect [Von Ville] to be challenging for a top 5 spot on the team, definitely.  Making the jump from sophomore to junior and being an upperclassmen, he's one of the leaders of the team and he's a lot stronger this year, so we have high hopes for him this year to kind of move in and fill one of those spots as a hole from our seniors from last year graduating," McConnell said, referring to Eric Halford and Jack Good.

Hudson is already off to an impressive start in the 2018 season, winning the GlenOak and Wooster invitationals, with Beucler and Manley going 1-2 in both races and Lucas Lay taking third in the latter.

It's early, though, and whether Hudson can realize for a second time what many see as this team's destiny remains to be seen.

"We know that the target is on our back here and we're up for the challenge.  I told the guys this summer, "you're going to have to work twice as hard as you did last year when you were hungry and you had never won a state title," McConnell said.  "So it's going to be difficult this year, and I think they're ready for that challenge."