The Centerville girls have been undeniably the most dominant team in Ohio cross country since 2014, raking in four consecutive state championships.

And they've done it in style, winning again and again when few have expected them to.

"The first year that we were able to win, we weren't the best team coming back on paper," head coach David Dobson said.  "And then the second year that we won in a row we lost a lot from that first state championship team and we weren't predicted to win and we had four freshman (Grace Kilroy, Rachel Whitehead, Savannah Lowe and Sophie Hippenmeyer) that came in and were terrific.  And then we actually a Nike national qualifying team that year."

Their third title run was led by that same 2015 incoming class, but also received critical help from two new freshmen in Kerri Walsh and Dalia Einstein, who were the team's fourth and sixth runners in their 25-point win over Troy.

And last season star freshman Emma Bucher stole the show at the OHSAA State Championship as Centerville's top finisher in 12th place, providing the edge for the team's 15-point victory ahead of Ursuline Academy. 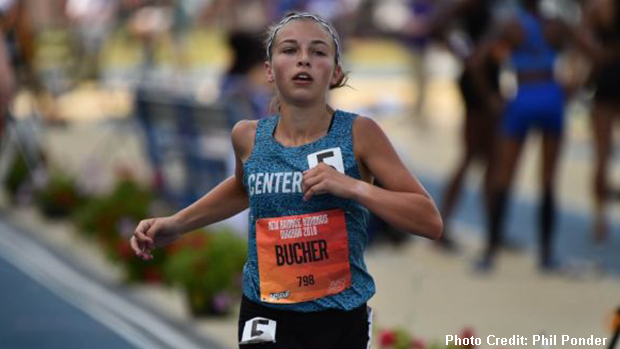 Emma Bucher has recorded two race wins and a runner-up finish so far this season.

But this season, for the first time time since 2014, Centerville will lack an elite-level freshman who will contribute immediately on a big stage, according to Dobson.  It will be unknown territory for the team, who will be forced to work with their returners if they want to repeat.

In other words, for a program whose brand has become adjusting to circumstances - even if those circumstances are often incredibly fortunate - they're right in their comfort zone.

Still, it's not as if the Elks are slim on talent.  They'll return six of the seven runners from last year's state title team, three of which finished in the top 25.  Dobson said the team will also get help from sophomore Nikki Jindal and juniors Katie Jauch and Hannah Mangen.

They'll also bring an overwhelming amount of experience to the table, particularly from their seniors who will be vying for their fourth career state title.

Despite the wealth of talent and experience, though, Dobson says his team currently faces questions regarding leadership this season.

"We don't have one person who has taken that responsibility on quite yet - who is kind of the go-to person.  It is just a little bit of a committee and there are some pros and cons to how that is and I think they're still figuring that out," he said. "When we figure and if we figure that out, that's probably going to determine how successful we can be - whether it's collectively they decide they're going to lead to lead each other or if there's going to be one person who will step up.  I don't know how to answer that exactly other than that's probably our biggest question mark at the moment."

The team may find a leader this weekend, when the program hosts their Saturday Night Lights meet, which draws teams from Kentucky, Illinois, Michigan and all over Ohio and will serve as a preview of postseason meets.

Regardless, the Elks are off to a hot start in 2018, winning the Trinity/Valkyrie seeded race by three points with Emma Bucher - who Dobson says will still develop over the next month and a half - taking second in 18:08 and their next four runners all finishing in the top 30.  And if the race is any indicator of their fate and potential for November 3rd, Kilroy, Whitehead and Lowe will be wearing gold for a fourth time.

"I think that [winning again] is possible, but I think our primary focus is really trying to develop our team to meet the successful line that we believe that we can achieve," Dobson said.  "So whether that means bringing home a state championship or whether that means three other teams have gotten so much better or have freshmen who have moved in or different things that other teams are better, I think we just want to feel like we raced our best at the end of the season and if that's good enough to win then I think we've got a shot at it."