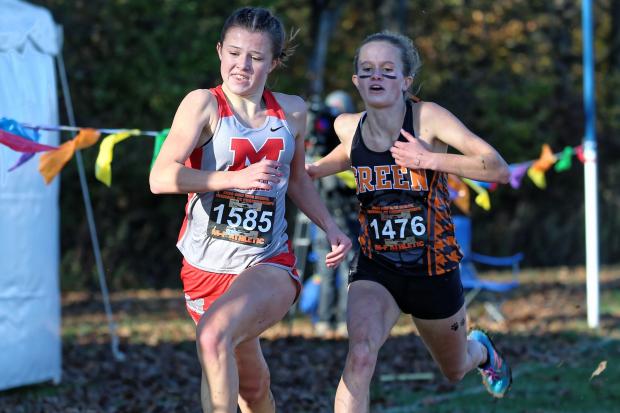 The Youngstown Regional Tournament took place Saturday, October 31st at Boardman High School. There were many great performances across the three divisions. Here are the top stories coming out of the meet:

In Division 2 action, the Bay boys team, led by Will Warren and Jude Ault, took down Woodridge 77-84. Heading into the race, Woodridge was ranked first in Division 2, while Bay was ranked third overall.

0.3 seconds is all that separated Mentor's Savannah Dennison and Green's Olivia Gang at the finish of the Division 1 Girls 5k. Down the famous backstretch of the Boardman course, Dennison made a surge with 50 meters left to edge Gang at the last second, finishing in 19:30.50 and 19:30.80, respectively. The two look to battle again in Columbus. The closest team battle of the day came from the Division 1 Girls Race where Hudson took the team title with 143 points. Kenston finished second with 145 points, and Shaker Heights finished third with 149 points.

Harvard commit Ella Gilson of Hawken continued her unbeaten 2020 campaign on Saturday with a 19:11.40 mark in the Division 2 girls race. Gilson's performance, alongside a strong ninth place finish from Juliana Metz, secured Hawken a team bid to Columbus. Walsh University commit Nathan Moore of Uniontown Lake continues a dominant senior campaign with a 16:26.20 run for the win in the Division 1 race. Moore will be joined by teammates Ian Clevinger and Alex Bauer in Columbus for the OHSAA State Championships. Hudson boys, led by senior Elliot Durkee, displayed their depth with a 26-second spread to win the Division 1 team title over St. Ignatius, Kenston and Mentor with 116 points. The East Canton boys team placed their top seven runners in the top 32 of the Division 3 boys race. This strong performance led them to the team win with 57 points. Canton Central Catholic finished second with 91 points.