Jake Blankenship, a Senior at Gahanna Lincoln, is Ohio’s 2011 State D1 Pole Vault Champion and the all-time Ohio outdoor  record holder with a vault of 17-0.75” (5.2) at the 2011 New Balance Outdoor Nationals.  He is not only the top vaulter in Ohio, but is the nation’s #2 indoor and outdoor ranked returning vaulter. He has a grandfather and uncle who were both vaulters, and tried vaulting in the eighth grade, but didn’t really like it. His interest was still in playing football and baseball, along with snowboarding.   He lost interest in baseball his freshman year and his mother bribed him into going out for track with a new snowboard. He vaulted 14’ that Spring and became hooked on vaulting.  That summer he travelled across the country with his grandfather, Bob Banhagel, competing in USA Track and Field meets.  His grandfather, has been involved with vaulting for over 50 years, having won the 60-and-older men’s pole vault competition in the 2010 USA Masters Indoor Championships. Since that time, he has also spent a lot of time training with his uncle, Rob Banhagel who pole vaulted for Western Michigan University clearing 17-6 1/4 in a collegiate meet, qualifying at that time for the Olympic trials. (Photo courtesy of Photorun.net)

OHRunners had the opportunity talk with Jake about his Bronze medal in the IAAF World Youth Championships last July, his success last year at State and his plans for this year.

OHRunners:  Jake, let’s start first with a few questions about your experience last year at the IAAF World Youth Championships? It is a great accomplishment to meet the Standards set by the IAAF for this competition and to then get the opportunity to go and represent the USA at these Championships. What were your first thoughts when you received the invitation? 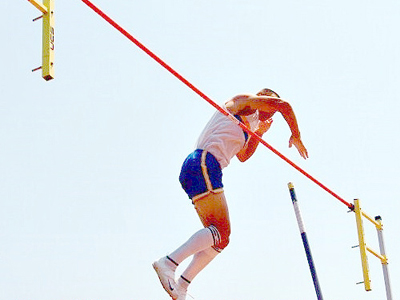 Jake:  My first thoughts were I was excited and happy that I was the only guy to be chosen out of the entire USA.  I couldn't wait to have my first trip outside the USA and have a track meet at a world class stadium.

OHRunners:  What was your training schedule like for this competition?

Jake:  It was very relaxed and on your own training. They told us that we had gotten  there for a reason, and that they we’re not here to coach us.  Just to help.

OHRunners:  Who coached you at this competition? Did you have a knowledgeable vault coach?

Jake:  My coach was Lee Webb, He was a decathlete and jumped 17 feet so he had some knowledge of vaulting. He was a lot of help and did a great job.

OHRunners:  How much did you know about your competition?

Jake:  I only knew about Bykov (Heorhiy Bykov of the Ukraine 5.35) and knew nothing about the guy from Sweden (Melker Svard Jacobsson of Sweden 5.45). But I didn't really care about who the competition was, I just went out there to do as well as I could

Jake:  I just wanted to do as well as I knew I could do. I just focused on the things I needed to work on and made sure that if I did a few things right it would help my jumping. The only strategy I had was to make all the heights on my first attempts.

OHRunners:  When you cleared 4.95 along with Renner (Robert Renner, Slovenia 5.25), what were your thoughts as Bykov had passed and Jacobsson had not even vaulted yet? 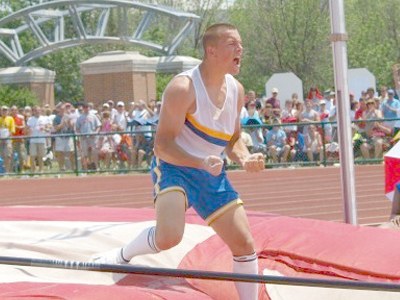 Jake:  I’d never seen a kid that has come in at that high of height and who had only jumped a little bit higher than the starting height. I didn't really think about it until the height was there, but I mostly just worried about myself and did what I needed to do.

OHRunners:  At 5.50, there were only four vaulters left. You were the first over, followed by Jacobsson. Renner then cleared the height. Bykov then failed at his three attempts. You were on the podium. Any strategy changes at this time as yourself and Renner were tied for the lead?

Jake:  I was glad to make the podium, so a lot of stress was gone and all I needed to do then was just jump. So I just relaxed and had fun with it.

OHRunners:  The bar was raised 10 centimeters.

OHRunners:   Take us through your next three vaults and what your thoughts were?

Jake:  On my first jump, everything was great. I came down fast and blew through, just barely tapped it. Then on my second jump, I saw the wind was switching a tad to a head wind.  I actually ran a a bit faster and was under, and came up short. Then on my last attempt, it was a full headwind.  With my adrenaline flowing, I ran fast and was under and really came up short.

OHRunners:  Were you satisfied with your effort and your results?

Jake:  I was very satisfied with my results, I thought I could have done better but I was very happy to know I was third in the world! 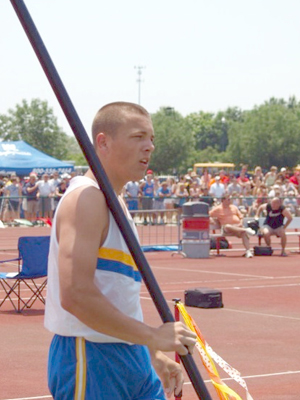 OHRunners: What have you done following that competition and the end of last year’s season?  Did you take time off?  When did you resume your training?

Jake:  After the IAAF World Youth Championships, I took some time off up to about mid-September and then started my weight training at a fitness gym with my dad.  I also started yoga classes once a week with my mother to help with the balancing of my muscles and for flexibility. I have been doing this for the past few months and just recently started getting back into the vaulting aspect mid-December. I’ve also done some agility drills and cardio work.

OHRunners:  In an article on you in ThisWeekSPORTS.com last year you stated:

"By my senior year, I want to win state and to become the seventh person to ever jump 18 feet while they're still in high school. I'm hoping to get some scholarship offers, and just like everyone else who does this sport at a high level, I would love to go to the Olympics. I never imagined I'd love doing the pole vault so much, and I'm really happy that my mom convinced me to give it a try."

This is your Senior year.  You won outdoor State last year pulling off a mild upset, but a well-deserved Championship, in which you set the all-time Ohio record of 17-0.75”.  You followed that up with a win at the New Balance Outdoor Nationals and a 3rd place finish at the IAAF World Youth Championships.  What are your specific goals as we enter into this year’s Indoor and Outdoor seasons?

Jake:  This year my biggest goals are to capture the indoor and outdoor national records. Yes, this seems like a very big goal.  I’m over a foot away, but I’ve tried to set my goals for this year high so I have something to reach for. I’d say first however, that I’m more concerned about taking our indoor state record most of all, and then work my way from there.  (Note:  The National HS Indoor Record was set in 2011 by Andrew Irvin of Mount Ida, AR, 17-9.25” (5.42)  The Outdoor Record was set in 2003 by Tommy Skipper of Sandy, OR, 18-3” (5.56)

OHRunners:  In regards to more specific vaulting questions, I know that you have various different poles.  What poles will you be using this year and how does pole selection play a part in vaulting strategies? In other words, how do you select what poles you will use in practice and competition?  i.e. runway speed, grip height, bar height, weather conditions, etc.

Jake:  Last year I was on 15'6" poles and had a max grip of 14'7" when I jumped my height of 5.20m. This year I’m looking to gradually working my way to 16' poles and to moving my grip up a bit more. Last year I spent a lot of time on technical work.  Not so much on my grip height. This year I’m going to continue to work on my technique, but I will be getting my grip a bit higher too.  Also, from past experience, this year I’m going to keep a notepad and jot down everything I do every time I go down the runway.  This will help me to be more proficient and it’s how I’m going to make decisions as to runway speeds, marks, grips, poles and so on. All of these are factors I should be able to determine after a meet or two.

OHRunners:  The last two years, until Regionals and State, you were somewhat in the shadow of Joey and Chris Uhle.  Last year at State, it was exciting to watch the intensity of the competition and the enthusiasm, cooperation and the encouragement of the three of you and your coaches each time one of you were up to vault.  Aside from the three of you, two Juniors were 5th and 6th, with vaults of 15-00. And 14-06.  The competition with the Uhles fueled determination and success for the three of you. This year, it appears that you will be alone in most competitions.  Will this change your competitive vault strategies? 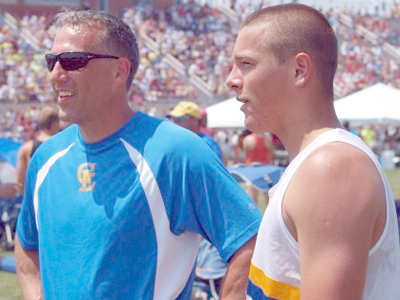 Jake:  I don’t believe that it will because the only time I jumped against the Uhles was at Districts, Regionals and State. Other than that, I was alone for most of the season, so I think I can do it alone. But hey, who says that I still can’t compete against them even though they are not in high school. They don't have to be there but I sure will miss having them there. Not only was the competition great but they are two great friends.

OHRunners:  One of your goals, as you’ve mentioned, is to clear 18 feet and become only the 7th high school vaulter in the nation to get over that height in high school.  Is 18 feet possible this year?  Indoors and outdoors?  What will it take to clear the height?

Jake:  I believe that anything is possible with the amount of work you put in to get there, and from where I am now, I believe that I am working hard enough to get there.  But, I’m going to continue to work harder and try to reach all of my goals for this year. Indoor my goal is to clear a height of 5.48m (roughly 17'10") and outdoor is to clear 5.60m (roughly 18'4"). It’s going to just take a lot of dedication, support and hard work.

OHRunners:  On your Facebook page, you clearly highlight Tennessee Vaulting.   Have you made a decision as to where you want to continue your career and your education next year?

Jake:  I have made a decision to attend the University of Tennessee, though everything is not official until I sign the letter of intent.  I have committed there however and I am very glad with my decision. I know they are the ones that will get me to where I want to be in the world of athletics and also get me on the right track on what I’d like to study.

OHRunners:  You’re 17-00.75 vault last year was ranked 6th in the Nation.  Only one other individual who is returning this year, Reese Watson of Spring, in Spring TX. vaulted higher.  His 17-2 vault ranked him 5th.  Where will you be competing first this year?  Do you see competing in any Invitationals where you may have “competition” prior to our Ohio state meet?

Jake:  My indoor schedule is very loose and is just to get me into the mode of vaulting. My first meet will be in Marietta on the 15th.  I ‘m going to the Reno Pole Vault Summit on the 20-21 and I’m planning on vaulting in all of the Ohio indoor meets.

OHRunners:  Jake, thanks so much for your time. We will look forward to watching you vault this indoor and outdoor season.  Hopefully with your hard work and determination we will see that 18’ vault here in Ohio.