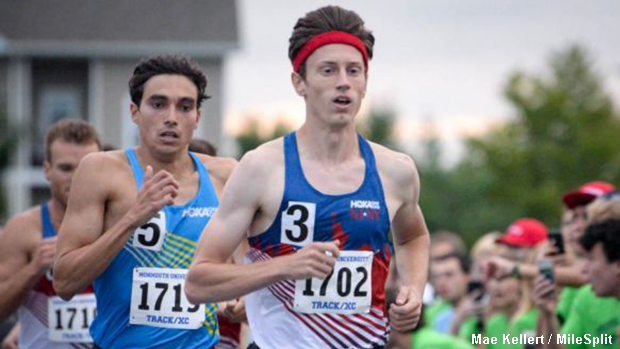 Colby Alexander outpaced an elite field to win the inaugural Sub 4 At The Shore title.

Ohioan Colby Alexander secured the 1 Mile race win at the Sub 4 At The Shore meet on Tuesday evening in West Long Branch, New Jersey with his outstanding time of 3:55.81.  Alexander, who represents the Hoka NJNY Track Club, led a quartet of runners under the elusive four minute standard.  He was followed in the standings by teammates Rob Napolitano (3:57.48), Ford Palmer (3:58.80) and Travis Mahoney (3:59.06).

Alexander was a distance specialist for Strongsville back in his high school days and he went on to compete for one of the nation's top collegiate programs, the University of Oregon.  His impressive list of pr's include: 1:46.09 (800m), 3:36.10 (1500m) and 3:54.94 (1 Mile).  The 2010 Indoor and Outdoor State Champion in the 1600 is a confirmed entry for the upcoming Guardian Mile, which is set to take place in Cleveland on August 11th.

.@UrbanSteepler and @RunnersHighNJ put on a great event tonight. Only guy in the field not from NJ. Had to represent OH well! https://t.co/xxKTGNGNnA

Sub 4 At The Shore Recap

From the calm before the storm, to the fire on the track...:fire::fire::fire: What a memorable night it was at Shore Regional High School. The njnytc crew amazed the crowd with @okaycolby taking the W in… https://t.co/7mNRIQC3st