Madisan Debos came into this season as the top returner from the 2017 OHSAA Division II Cross Country Championship and so far she's lived up to her billing.

The senior from Tuscarawas Valley will enter Saturday as the favorite to take the individual title and has won several meets this season, including the Pickerington XC Classic, the Dave Clegg Invitational and most recently her district and regional contests.

Ella Gilson, a sophomore from Hawken, will be arguably Debos' strongest competition.  She finished in fourth place behind three of Division I's strongest runners at Centerville's Saturday Night Lights meet and has won her fair share of meets including, like Debos, her district and regional championships.

All eyes will also be on Grace Hartman, a freshman from Oakwood who has burst onto the scene in 2018.   She's taken home gold at the Bob Schul Invitational and won the Southwest District meet, the Troy Regional championship and very well could be Ohio's next freshman state title winner.

Other contenders to watch on Saturday include Oakwood junior Elizabeth Vaughn, who was 10th at the 2017 state championship; a trio from Lexington including sophomore Joanna Halfhill (48th in 2017), senior Carina Weaver (14th in 2017) and sophomore Halle Hamilton (26th in 2017); and Van Wert junior Caylee Phillips.

For many, Lexington senior Kyle Johnston will enter the weekend as Division II's favorite on the boys' side.

Johnston has put together a monster campaign, winning the Tiffin Cross Country Carnival and the Malone University Invitational, as well as his Region Championships.  He was fourth at last year's state meet, behind his brother Ryan in second - a result the younger Johnston will try to avenge come Saturday. 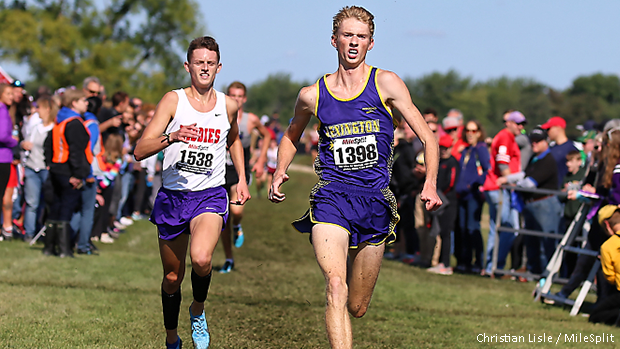 Kyle Johnston will look to cap off his high school cross country career with a state title.

Wedged in between the Johnston brothers at last year's state championship in third place was Shelby junior Caleb Brown, Johnston's biggest competitor this season.  The two have squared off all throughout 2018, with Brown winning at the Seneca East Tiger Classic and Region 6's Northwest District and Johnston getting the better of Brown at the Tiffin Invitational and the Region 6 Championships.  Saturday will act as the ultimate tie-breaker for the duo this year.

One of Brown's and Johnston's most formidable opponents looks to be St. Vincent-St. Mary senior, Alex Phillip.  Phillip has put together an impressive season, earning wins at the Legends Meet, Region 5's Northeast District and the DII Region 5 Championships.

Tucker Markko, a senior from Unioto who was 16th at last year's state championship will also be in the mix.  He was third at the Region 7 Championship, but says that he thinks he and his team will benefit from the extra week of training because of the delay.

"At first after hearing the news of State's being postponed I thought it would have affected me a lot; but then I realized this was an advantage for my team and I.  I think Saturday's outcome will be a lot different than if it were last week, many teams and athletes will be affected.  My team and I however will not be impacted negatively," he said.  "My coach is peaking our team perfectly for Saturday."