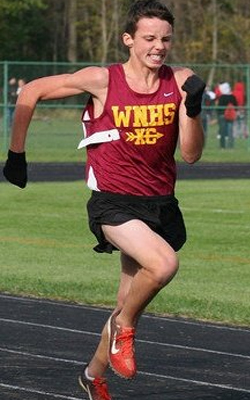 -Best time in a 5K race and in which meet:

-Tell us how your summer training is going?

I'm just getting into the swing of things. My track season didn't end until June 15th, so after taking two weeks off I'm only a few weeks into training, but so far it's going well. Just a lot of aerobic work with some swimming incorporated.

-What are your goals for the upcoming season?

I want to lead my team to the best finish at the state meet in school history. I also would like to improve on my 10th place finish from last year and give my good buddy Sam Wharton a run for his money.

-How long have you been running and how did you get started?

I started running in 7th grade because my 6th grade Social Studies teacher was the middle school XC coach and he told me to come out. Running was fun and I was good at it, but it didn't become my main focus until high school. I played soccer and ran cross country freshman year, but after that I dropped all sports but running.

-Will you be competing anywhere out of state this season?

If our team has a strong season we plan to take a team to the Nike Regional in Indiana. There is also a possibility that if I'm feeling up to it at the end of the season I could run Footlocker as well.

-What is your favorite course to run in Ohio?

-What is the toughest course to run in Ohio?

The toughest course I've run on is the Lancaster course, because it is very hilly and tends to be muddy, making the hills that much harder.

-What meet during the regular season do you put extra emphasize on to compete well at?

We try to put as little emphasis as possible on any meat until Regionals. We run hard and try to place well at meats like Tiffin and MMOC, but we still don't put emphasis on them. Starting in July we're only focused on State.

-What is your favorite cross country race so far in your high school career?

My run at Lancaster last year is probably my favorite, because it was the first time I had ever won an XC race with strong competition. It sort of felt like a break out race, because I beat a few guys that I had no business beating. Including Sam (haha).

My best XC memory is when our team placed fourth at Regionals last year. Going into it, I don't think there was a person outside of Westerville North that thought we had any chance of making it to State. But we all pulled together and had the races we needed on the right day.

-When you are not running what is your favorite thing to do?

I really like playing soccer and basketball with my friends. Or hanging out with Kristen Eisenhauer.

-What's on your Ipod when you go out for runs?

I don't listen to music when I run. Except when my coach runs with me and yells at me. That's music to my ears.

-What professional athlete would you most like to meet?

Andrew Wheating. He seems like the kind of guy that would be really fun to hang out with. He's fast on the track, but off the track he just likes to have fun.