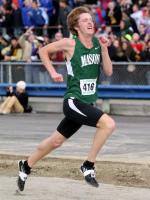 Catching up with Top Returners: Tom Clark...
Ohio MileSplit got in touch with some of the top returners throughout the state in all divisions to see how their summer training was going and ask a few other questions.  Take a look inside to catch...

2012 OHSAA State Cross Country Championship Preview...
Three individuals and five teams return to defend their titles at the Dragstrip.  With the outskirts of Hurricane Sandy sending rain and snow into Ohio throughout the week, we could be in for a slopp...