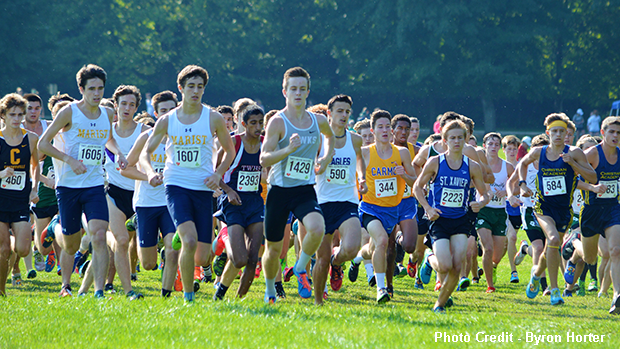 Lakota East's Dustin Horter took the lead from the onset on route to an opening mile of 4:42.

It was a hot, sunny day at Tom Sawyer Park.  The race was one of the most highly anticipated races of the year because it was one of the biggest in the Midwest and it was being run on the course that the NCAA is going to run Nationals on this year.  Having said that, a large crowd was in attendance, so the pressure was on!

The team began our regular 1.5 mile warm up and came back to stretching.  There was a relaxed feel to our stretches and drills, for better or for worse, but nevertheless we went about our business and did 4 hard strides.  I ran out to about the middle of the field and took a knee on my own to talk to God before my race. It seemed like the hustle and bustle of the race stopped for a second as I prayed that win or lose, I hoped to glorify God's name.  Then together as a team we huddled up for prayer and then it was time for the race.

The gun blasted and 80+ boxes of competitors sprinted off the line.  I moved to the front from the get go as I usually do.  My plan was to take the first mile out hard and maintain as much as I could through the next two miles.  By mile one I felt relaxed and controlled, running 4:42.  I was a few seconds off where I wanted to be, so my plan was to make up lost time on the next mile. However suddenly a runner from Tampa ran me down and hopped into the lead.  I would be lying if I said I wasn't surprised to see Trevor Foley pull up alongside me (since I've never raced Foley before), but his move helped me push the second mile harder than I might have on my own.  We went back and forth for about 3/4 of a mile until I took the lead back heading into the two mile mark.  I believe I came through around 9:35, which was a lot slower than I wanted to run.  At that point it was about grinding out the last mile for a solid mark.  I started to expand the gap on Foley and really started to push to attempt to lose him.  With about 800m to go, I reached a point in the course that I could roll on.  With 400m to go, I was comfortably pushing myself again and just trying to have fun with it.  I turned the corner of some trees and the finish line was only 200m away, which was a nice surprise at this point in the race.  I propelled myself through the line with the help of the cheers from the crowd in 15:02.  I wasn't sure how to feel about the race at that point, but I soon realized that it was a decent mark.  After a few girls clipped my chip off my spikes, I was able to get my hands on a Gatorade and then shook hands with as many people as I could as they came through the line.  It was nice to see that other competitors started to do the same; it was truly a great atmosphere of sportsmanship and community.

Overall I feel as though the meet went well for myself individually.  Looking back at some past times on the Trinity Valkyrie course, I had run similar or faster times compared to some big names coming out of high school.  I failed to reach the time I wanted to hit at Trinity, but realized that the only thing that matters is post season racing.  As long as I'm where I want to be by then, things should flow smoothly. 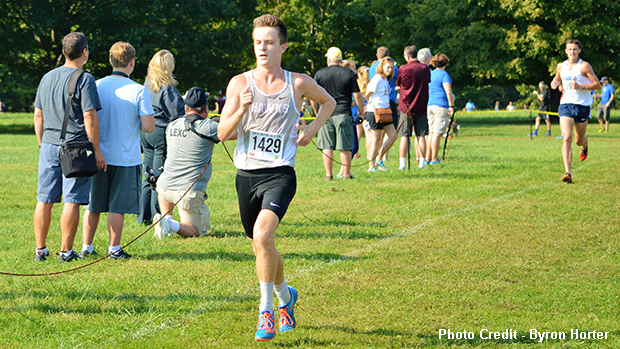 Dustin Horter was satisfied with getting the win and he's aiming to peak for the post season.